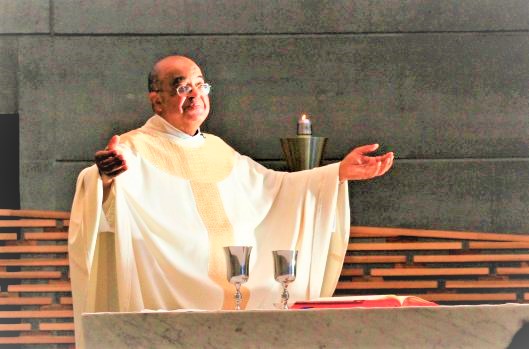 Diocese Release: Very Rev. James V. Matthews, beloved rector of the Cathedral of Christ the Light and longtime pastor of St. Benedict Church in Oakland, died suddenly of an apparent heart attack early on the evening of March 30. He was 70.
Emergency services were called to the cathedral Rectory about 7 p.m. Saturday, after other priests and Chancery staff members found him unresponsive. He was taken to Alta Bates Summit hospital.
"Father Matthews' infectious love for his faith, his parishioners and his community was a source of joy and inspiration for me," said Oakland Bishop Michael C. Barber, SJ, in a statement. "He truly lived what St. John Vianney, the patron saint of parish priests, described the priesthood to be: 'the love of the heart of Jesus.' I shall really miss him."
Father Matthews — known as Father Jay to more than one generation of Oakland Catholics — was ordained in 1974. He was the first African American to be ordained in Northern California.
"I'm a native guy," Father Matthews said in a 2015 interview with The Catholic Voice. He was born in 1948 in Berkeley and raised in Oakland. "Oakland is my home," he said in the interview.
His family moved there in 1960, and it was at his confirmation in 1962 that Bishop Floyd Begin, the first bishop of Oakland, invited him to consider the priesthood.
Four years later, after his graduation from Skyline High School, he entered the seminary. He returned to St. Benedict to celebrate his first Mass; he came back to become pastor in 1989. Father Matthews was graduated with a bachelor's degree from St. Patrick's College, Mountain View, and a master's degree from St. Patrick's Seminary, Menlo Park. He did post-graduate work at the Jesuit School of Theology in Berkeley and the Pontifical Gregorian University in Rome.
In recognition of his standing in the community, in 2014 the Oakland City Council proclaimed May 6 as Father Jay Matthews Day.
"As far back as I can remember I have cherished all things religious," he wrote on his 40th anniversary as a priest in 2014. "As a little tyke I was captivated by the stained glass windows of our home parish, St. Ambrose in Berkeley. The artwork depicted scenes of our salvation history and I felt good about being a part of that history."
He credited "three beautiful women who moved me along towards priesthood:" his two grandmothers and a Holy Cross Sister.
In his 44 years of priestly ministry, Father Matthews has served in several diocesan roles including as vicar for Black Catholics, a member of the diocesan Pastoral Council and as a chaplain for the Oakland police and fire departments.
"I grew to appreciate the uniqueness of my heritage coupled with Catholicism," he wrote.
Funeral services are pending.
FULL TEXT Release from oakdiocese.org
********************************

https://donorbox.org/support-catholic-news-world-we-need-
Posted by Jesus Caritas Est at 9:51 AM

I know I should be celebrating his life and journey to Heaven, but right now I am so saddened that I am numb.