BREAKING Cardinal Müller says Pope "Francis is not a heretic" and "Such an accusation...is the worst that can happen in the Church.." 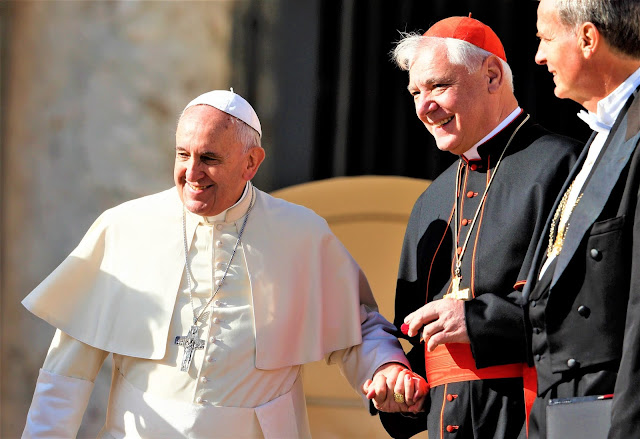 Pope Francis is not a heretic, said curia cardinal Gerhard Müller in conversation with the "Tagespost". (the interviewers questions are in italics)
Cardinal Gerhard Ludwig Müller defended the pope against heresy accusations and at the same time warned against a personality cult around him. Francis is not a heretic, Müller said in this newspaper. It was also "fundamentally wrong" to blame him for everything that is currently going wrong in the church.
The following are some excerpts from the lengthy German Interview:
Eminence, the signatories of an open letter to Pope Francis, accuse him of heresy. How serious do  you this accusation is?
Such an accusation against the supreme representative of the true faith revealed by God in Christ is the worst that can happen in the "Church of the Living God, the Pillar, and the Foundation of Truth" (1 Timothy 3:15). For the Pope, as Bishop of Rome, is the successor of St. Peter, to whom the Lord has built his Church. In Peter every pope repeats the confession of the Church at all times: "You are Christ, the Son of the living God" (Matthew 16:16). Since the authors are renowned theologians, it would be important for the Holy Father to have an official clarification published by the Congregation of the Faith, not by the State Secretariat or by friendly journalists and theologians.

How is the charge historically classified? Were earlier popes also exposed to the charge of heresy?
Historically, there were few popes who were accused in one or the other point of error - thus the inerrancy ex cathedra was not in question. Here, the charge goes deeper, namely, that the whole structure of the Catholic faith in its principles of knowledge and in some of its essential contents would be uprooted. I do not share that. In my opinion, the problems stem from the wrong approach, that the church has lagged behind the times, and that faith needs modernization so that the contradiction in important questions of morality vis-à-vis the leading forces of the Western world is not so blatant. In the camp of the "friends" of the Pope - as some call themselves self-legitimating by branding every devout faithful Catholic to the Pope's enemies - one confuses faith with a neo-Marxist-neoliberal ideology. One speaks of traditionalist and modern believers. And they think that only with them and through them alone does the church have a future. In fact, the faith of the Church rests on the self-revelation of God, transmitted through the Scriptures, the Apostolic Tradition, and interpreted by the whole Church, and especially the Magisterium of Bishops, with the Pope as the principle of their unity, unadulterated and uncircumcised.

The Church is indeed internally and externally in one of the most serious crises in its history. It will not continue if it transforms into a religious-political NGO, relativising or completely abandoning its Christ-taught faith and morality. Self-secularization, which has been going on for over 50 years, does not save the church from the abyss, but brings it closer and closer.

What do you see then the problem?
The problem is that the theological criterion of orthodoxy and heresy, that is, the belief according to the revelation or the false belief in their own opinion, has been replaced by the ideological-power-political scheme of the conservative-traditionalist-fundamentalist-right brakes against the left-liberal-modernist-cosmopolitan pacesetter in the utopia. This is the stale salt that you throw on the street, where it is crushed by the people. If the adaptation to the decline of morality is spent as a synodal process, then one will soon no longer recognize the church. But it will not be different, it will not be any more, at least in the regions where false prophets set the tone.

They defended "Amoris laetitia" as Prefect of the Congregation of the Faith. What position do you represent today?
Even after my time as Prefect, I defended "Amoris laetitia" in order to contradict the assumption from the opposite side that in my statements I would be guided by opportunistic considerations. I have welcomed the fact that the Pope is also pastoral for Catholics in irregular marriages, but some clarification of the doctrine of the Church is in need of clarification. It is often the case with his documents that while the preparatory people may be his confidants, they are neither officially nor professionally expelled from theology, and they are guilty by causing irritation that greatly affects the Pope and the papacy damage. It can not be denied conspicuously to the pope by an adviser that each bishop decides that Christians who are not in full communion with the Catholic Church may receive holy communion except in the event of death or spiritual constraints , The individual bishop can not override the authentic doctrine on a case-by-case basis, but only determine whether there is a condition that a non-Catholic Christian, in extreme cases, be at risk for his salvation, the sacraments of penance (which is even more urgent) and the sacred Communion may receive. It is a sign of intellectual and moral decay when the professors of the Catholic faith are accused by those who disfigure him of disobedience to the pope and the bishops, and of controversy and division.

Can a pope, who has made no binding decision on matters of faith except for the change in the catechism (death penalty), incur the charge of heresy?
The concept of the heretic includes the obstinate denial of a revealed and infallibly submitted doctrine of the church. This is not the case with Pope Francis. As much as one understands the concerns of the theologians of this explanation, one must say that one must choose the right means for the legitimate aim of greater clarity in some of Pope Francis' statements. Above all, every Catholic is entitled to oppose the claim of alleged Pope friends who claim for themselves a papal authority.
(Image source: Google Images - CNS Harding)
********************************

DONATE Now to Catholic News World, a Mission, which brings the Gospel to over 200 Countries World Wide! Easy Just Click the LINK below!
If you do not support Christian media who will?
Every little bit helps - as a Donor you and your Family will be added to our Church Prayers - You can add your prayer intention on the Donation site "Donor Wall":

Excerpts Translated from Tagespost Interview https://www.die-tagespost.de/kirche-aktuell/Zeit-fuer-ein-klares-Wort;art312,198158
Posted by Jesus Caritas Est at 10:47 AM