#BreakingNews $50,000 Damage by Vandals to Catholic Shrine of Our Lady of Fatima in Buffalo 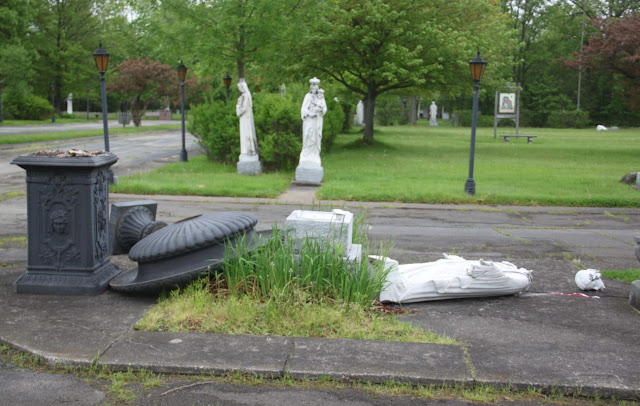 Buffalo News reports that vandals did as much as $50,000 worth of damage to statues and other outdoor displays at Our Lady of Fatima Shrine. Father Peter M. Calabrese, associate director, said four statues, two of them made of marble and two of fiberglass, were tipped over or had pieces knocked off. Two of the statues, one depicting Jesus and the other St. Gaudenza, were knocked to the ground. Also, a large urn, some marble benches and a pillar in the outdoor chapel were damaged in the vandalism, which occurred late Tuesday night or in the early hours of Wednesday. Father Calabrese said there have been some less extensive vandalism incidents at the Swann Road shrine in the past, including one in which a statue's head was knocked off. "This is the first time we've had so much at one time," he said. Lewiston Police are investigating.
The shrine, which opened in 1956, is operated by the Barnabite Fathers.
Full Text share from Buffalo News.com - Image source Google Images
********************************

DONATE Now to Catholic News World, a Mission, which brings the Gospel to over 200 Countries World Wide! Easy Just Click the LINK below!
If you do not support Christian media who will?
Every little bit helps - as a Donor you and your Family will be added to our Church Prayers - You can add your prayer intention on the Donation site "Donor Wall":
https://donorbox.org/support-catholic-news-world-we-need-
Posted by Jesus Caritas Est at 8:42 AM

These atheistic criminals will get the punishment promised them. I pray for people to understand the wrath they cause for themselves in the destroying of anything that doesn't belong to them. God help them.