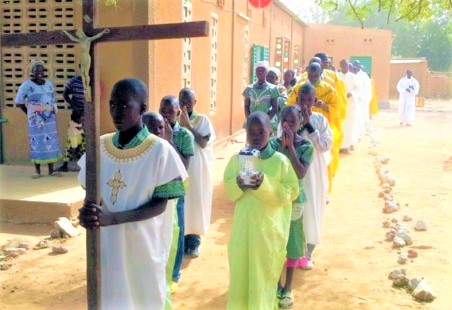 Another attack against Catholics: 4 faithful killed at the end of a procession; statue of the Virgin destroyed
Tuesday, 14 May persecutions Ouagadougou (Agenzia Fides) - New attack against Catholics in Burkina Faso. On May 13, four faithful who were bringing the statue of the Virgin back to church after participating in a Marian procession were killed in Singa, in the municipality of Zimtenga (25 km from Kongoussi), in the central northern region of the Country. This is the same region to which the province of Sanmatenga belongs, where on Sunday 12 May, Fr. Siméon Yampa, parish priest of Dablo, was killed along with five faithful in the attack on the church during Sunday mass (see Fides 13/5/2019). According to information sent to Fides, the Catholic faithful of the village of Singa, in the municipality of Zimtenga, after having participated in a procession from their village to that of Kayon, located about ten kilometers away, were intercepted by armed men. The terrorists let the minors go, but they executed four adults and destroyed the statue. On May 13, His Exc. Mgr. Séraphin François Rouamba, Archbishop of Koupéla and President of the Bishop’s Conference Burkina Faso-Niger, made an appeal for peace and peaceful coexistence during the funeral of the victims of Dablo. The funeral was attended by Catholics, Protestants, Muslims and representatives of traditional religions. (L.M.) (FULL TEXT Release : Agenzia Fides, 14/5/2019)
Posted by Jesus Caritas Est at 3:05 PM