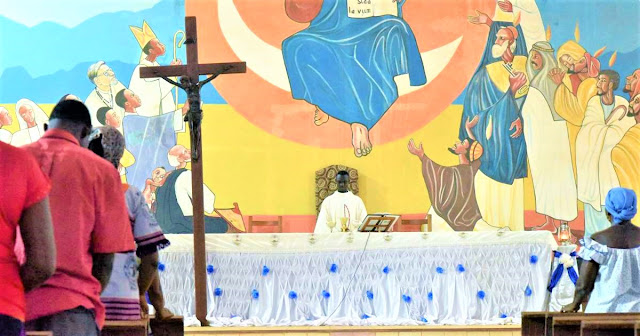 On Sunday, May 26, 2019 another four people were killed at a Catholic church in northern Burkina Faso. This is the fourth in a series of attacks on Christian targets in the region, according to a bishop of the area and a security source.

"The Christian community of Toulfe was the target of a terrorist attack which gathered for Sunday prayers. The attack left four of the faithful dead," the Bishop of Ouahigouya, Justin Kientega, said in a statement.

"Heavily armed individuals attacked the church... as the faithful were celebrating Sunday mass" in the town of Toulfe, the source had said.

A local resident contacted by phone by AFP said the attack "caused panic in the village and many residents sought to seek cover in their homes or in the bush."

Last week gunmen killed four Catholics in a religious procession, the day after a priest and five parishioners were murdered at mass.

Burkina Faso's population is around two-thirds Muslim and one-third Christian.

Jihadist groups have been attacking Christian clerics as well as Muslim who are not as radical.

DONATE Now to Catholic News World, a Mission, which brings the Gospel to over 200 Countries World Wide! Easy Just Click the LINK below!
If you do not support Christian media who will?
Every little bit helps - as a Donor you and your Family will be added to our Church Prayers - You can add your prayer intention on the Donation site "Donor Wall":
https://donorbox.org/support-catholic-news-world-we-need-
Posted by Jesus Caritas Est at 10:56 AM

So sad God help us