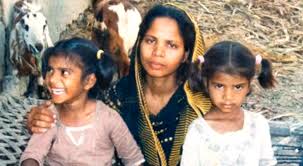 Asia Bibi, the Christian woman who spent years in jail due to a blasphemy charge and then in fear of the death sentence imposed on her in 2010, has left Pakistan. A source from the country's Foreign Ministry stated, "Asia Bibi has left the country, she is a free woman and has set out on her own journey" said the source.

According to the CBC news Asia Bibi has arrived safely in Canada; where two of her daughters have been living.
Asia Bibi was acquitted of charges of blasphemy on October 31, 2018. She  spent nine years in prison, sentenced to death and awaiting an appeal process that was continually postponed.

Islamic radicals of the Tehreek-i-Labbaik Pakistan (Tlp) party set the country on fire and contested her acquittal. The government of Imran Khan came to terms with the demonstrators and agreed to a revision of the Supreme Court verdict. Asia was released but could not leave the country because on that agreement with the radicals.
The Canadian News noted that:

Wilson Chawdhry of the British Pakistani Christian Association told The Associated Press on Wednesday that he received a text message from a British diplomat saying "Asia is out." A close friend of Bibi also confirmed that she had left the country, speaking on condition of anonymity for fear of reprisal.

A statement from the association says it received confirmation around 8 p.m. ET Tuesday that Bibi "had safely exited Pakistan."

"Asia Bibi bravely held on to her faith through the most brutal of incarcerations that involved her having access to sunlight for two hours per month," the statement says. "Now she finally travels to Canada to be reunited with her children."

Chowdhry said in the statement released by the association that Bibi is "unwell" after suffering a decade of isolation both in and out of captivity. Source: CBC
Posted by Jesus Caritas Est at 4:06 PM