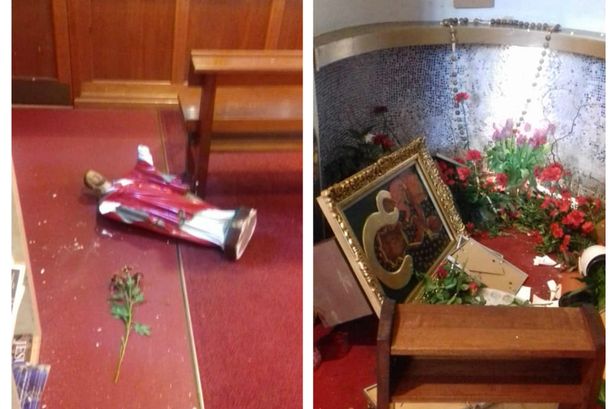 A shrine of Our Lady of Częstochowa was desecrated and a statue of Jesus smashed in the attack on St Simon's in Partick. The Archdiocese of Glasgow has condemned a "shameful attack" on the city's third oldest church. Police Scotland were called to St Simon's in Partick at about 16:20 on Monday, April 29, 2019 .  The Archdiocese of Glasgow's Facebook page said: "Whatever the motive this is a shameful attack on a much loved church. "Let's help find those responsible. This kind of activity is unacceptable."
The government also voiced a complaint MSP Sandra White, in whose constituency St Simon’s is located, the First Minister said the vandalism was ‘absolutely appalling and a complete outrage.’   Scottish Labour leader Richard Leonard said the ‘whole congregation of St Simon’s have my solidarity, and we must do all we can to stamp anti-Catholic bigotry in Scotland.’ Speaking on Thursday during First Minister’s Questions, Mrs Sturgeon said: “While it is for the police to investigate such incidents and any motivation for it, we should all be clear that this anti-Catholic or possibly anti-Polish discrimination must not be tolerated “Just like anti-semitism or Islamaphobia, anti-Catholic discrimination is a scourge on our society and it must be eradicated. Places of worship whether Christian churches, mosques, synagogues, temples, any places of worship must be places of peace and sanctuary.” She added that she and the justice secretary have ‘given a commitment’ to exploring what the government could do to ensure safety and security at places of worship.
The incident comes one week after Holy Family Parish in Mossend, Motherwell Diocese, was subjected to anti-Catholic graffiti scrawled on a nearby bus stop. The words ‘F**k the pope’ were tagged onto the bus stop one month after the local Catholic primary school’s windows were smashed. Edited from the Scottish Catholic Observer
Posted by Jesus Caritas Est at 9:38 PM