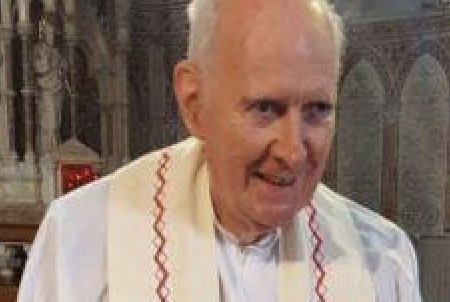 Fr. Michael Guckian RIP
A Daring Missionary to the Phillipines

It is with great sadness the Oblate Community announces that the death has occurred of Fr. Michael Guckian OMI.
Fr Michael died aged 81 on Saturday the 11th of May following an accident in his home country of Roscommon.

Michael was born in 1938 in County Roscommon in the West of Ireland, and was ordained to the Order of the Missionary Oblates of Mary Immaculate in 1964. Shortly after his ordination, Fr Guckian went to the Philippines on mission; where he spent more than 25 years of his missionary life, in a wide variety of ministries, and often in areas fraught with danger. He was a selfless, brave and lovely man and will be sadly missed by the Oblate Community and the staff and parishioners of Mary Immaculate Parish, Inchicore. Our thoughts and prayers are with his family and wide circle of relatives and friends.

With thanks to the OMI Province of the Philippines for their contribution and memories of Fr Michael.
A Daring Missionary to the Philippines
From March 10, 1965 Fr Guckian served in various ministries in the Philippines: in parishes, Notre Dame schools, and the retreat house but the foremost of these were in Non-Christian communities. He was first assigned in Kidapawan, Cotabato for more than a year. Then he was assigned to take care of Dulawan (now Datu Piang), a dominantly Muslim populated parish in November 1966.

The following year, Bishop Gerard Mongeau, OMI, D.D. asked him to take care of a new school in Dalican, Notre Dame of Dinaig, without realising where Dalican was and that Dalican was another Muslim dominated municipality. However, several years later, he realised, “What a wonderful thing that was happening. The Dinaig Mayor approached a Catholic Bishop and requested him to open a Notre Dame School for his people – Maguindanaons.”

In 1969, he began to study the Filipino language in Midsayap but went back to Dalican and on to Dulawan every Friday evening. He taught a bit at Notre Dame of Dulawan to get to know some students. He tried to build up the small Catholic community. He helped the farmers who suffered a great loss when the flood came. They wanted to cultivate their land but they had no plow, no carabao, and no seed. He presented the case to Bishop Mongeau who was most supportive and the farmers agreed to repay at harvest. He did a lot of visiting and discovered in meetings, Dulawan’s need for dikes. So the following year, dikes were started. This was his main entry into direct work with and for the Muslim Maguindanaons of Datu Piang.

Having gained experience in Dulawan and Dalican, in 1984 he was assigned to the Vicariate of Sulu whose population was overwhelmingly (97%) non-Christians; where the Oblate missions were isolated and reached through travel by small boats. He was assigned in Siasi and later to Notre Dame of Jolo College to be in charge of the Campus Ministry. Working with students and faculty members taught him many things about Muslim-Christian relations,

“It was there that my faith was strengthened that both faith communities must come together more to understand and respect each other’s belief and tradition.”
Shortened from oblates.ie