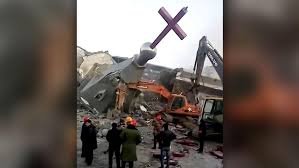 Handan, Shen Liu church demolition begins. The destruction of 23 more churches is scheduled (VIDEO)
Asia News Report: by Peter Zhao
The government wants to demolish the church because it is "too visible from the highway". It also says that there are no building permits. But the faithful say this is false. The Communist Party changes attitudes "like the moon": first it gives the permits, then it denies them. Prayer campaign of the faithful. Handan is only the first step: other dioceses are next.


Handan (AsiaNews) – Last night, between May 6 and 7, the demolition of the Catholic church of the village of Shen Liu in the diocese of Handan (Hebei) began. So far the destruction has entailed removing a huge cross from the bell tower, but soon the walls will be torn down.

Local authorities have motivated their decision because the church and the cross are "too visible" from the nearby highway and passing cars can be distracted by the Christian symbol and the building. They also say that the church does not have all the necessary building permits. Instead parishioners maintain that the church – belonging to the official community - was built with the permission of the Religious Affairs Office.

According to some priests of the diocese, the local government has already planned the destruction of 23 other churches, all belonging to the official community.

The injunction to demolish Shen Liu's church dates  to April1 8, Holy Thursday. After much discussion with the priest in charge, the authorities agreed to removing only  the cross and saving the building, however, only if it is used for other purposes not related to worship.

It is very likely that the priest will accept this condition. As one of the faithful comments, taking his cue from the game of Chess, he is willing "to sacrifice the  knight to save the queen".

The Diocese of Handan has already been warned that there are at least 24 churches that "have no building permits" and will therefore be destroyed. In fact, as the pastor of one of them explains, "at the beginning of the construction of the church, we filed the request and we also obtained permission from the Religious Affairs Office of the village, the municipality and the county. Now they say that it is no longer valid! ".

An elderly Shanxi priest comments laconically: "The Communist Party is like a moon: it changes every day, from the first to the 15th of the month!"

Throughout the diocese the faithful are organizing moments of prayer to Our Lady to "ask for her protection", hoping that "the holders of power will change their mind and grant true religious freedom to the people".

Others, especially among the priests, express some considerations: "The violence of the world can demolish the crosses and the churches, but it cannot destroy the Church and the faith in people's hearts! According to history, totalitarianism has never succeeded in destroying the Church, on the contrary it has made it has purified and strengthened it! More than 2000 years have passed since the Church was founded: how many tyrants wanted to destroy it? And how many dynasties has the Church survived? No dictator can escape the grip of death, and no society always thrives; time is the best tool! The Zhou dynasty respected ceremonies and rituals, and therefore lasted 800 years; violence reigned in the Qin dynasty, and it lasted only two generations. Whoever gains the heart of the people will reign! ".

Another priest warns: "I fear that after starting from the diocese of Handan, they will soon pass to other dioceses to make them suffer the same fate. Long ago, Handan's minor seminary was dissolved; then they put the Chinese flag in place of the cross. Thus, slowly, other dioceses will also have to follow the example. Last night is the first church in the Hebei province from which they have torn down the Cross. Who knows whose turn is next! ". Full Text Share from Asia News IT
Posted by Jesus Caritas Est at 8:49 AM