Funeral Mass for Jean Vanier, founder of L'Arche - who reminded us of "the infinite beauty of each person" - Video 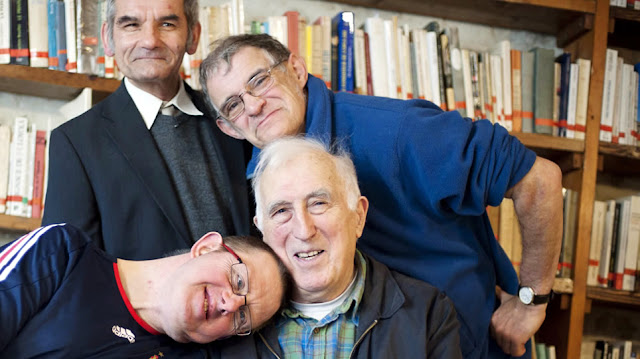 Jean Vanier, founder of L'Arche communities and Faith and Light groups died May 7, 2019, at the age of 90. He was mourned by the members of the various communities.  Archbishop Pierre d'Ornellas of Rennes presided at the funeral Mass. The concelebrants were Archbishop Vincenzo Paglia, president of the Pontifical Academy for Life, and Ukrainian Archbishop Borys Gudziak, who will be installed as head of the Archeparchy of Philadelphia in June.  Bishop Nicholas Hudson, a Westminster auxiliary, read the Gospel.  He was in a simple pine casket, which was made by members of the community.
Pope Francis sent a message which was read at the funeral: he prayed that the L'Arche communities around the world would "continue to be places of celebration and forgiveness, compassion and joy, demonstrating that everyone, no matter his or her disability, is loved by God and called to participate in a world of brotherhood, justice and peace."  The Holy Father invoked his apostolic blessing upon all members of the communities. L'Arche – has grown to 154 communities in 38 countries. For his funeral Mass, Vanier had chosen the Gospel reading of Jesus washing his disciples' feet. Archbishop d'Ornellas said: "To touch our hearts and heal them, he uses no other means but presenting himself as weak, as the least of the servants." "Through his weakness, he washes our hearts, which are hardened by pride and barricaded in power, security and the certainty of being right..."
Vanier, showed people "the infinite beauty of each person," the archbishop said.  "The Gospel was John 13, 1-17: The Washing of Feet. It was read first in French by a sight-impaired (blind) Deacon; then in English by the Bishop.
Posted by Jesus Caritas Est at 8:22 PM