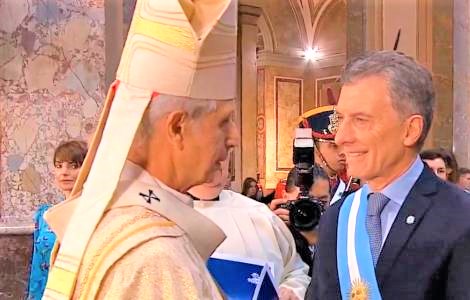 AMERICA/ARGENTINA - Te Deum for the nation: Cardinal Poli calls for a Great National Pact in favor of the poor
Monday, 27 May 2019
Buenos Aires (Agenzia Fides) - The Archbishop of Buenos Aires and primate of Argentina, Cardinal Mario Aurelio Poli, said that "it is time for a Great National Pact" with a "preferential option for the third of the Argentine population currently living under the poverty line". This is what the Archbishop said in the annual Te Deum ceremony celebrated on May 25, a national holiday that commemorates the revolution of 25 May 1810, which began the process of creating the Argentine state. "Isn’t this a moment to go towards a ‘Great National Pact’ with a wide and generous view, one which is neither functional nor circumstantial, leaving aside narrow sectarian interests?" asked Cardinal Mario Poli, before a packed cathedral including President Mauricio Macri, the mayor of Buenos Aires, Horacio Rodríguez Larreta, and other state authorities. "A proposal that should involve all the big names in Argentine politics, who must be open to “creating a culture of encounter, with intelligence, creativity and imagination, gathered at a dialogue table that accentuates the commonalities and not so much the differences, with clarity, affability, safety and prudence". The note sent to Fides informs that the Argentine Primate stressed that this year "the nation's leadership will be renewed through the polls". Poli sketched the realities of a political season, saying "candidates will be defined, parties will make their proposals, there will be budgets for campaigns, speeches, electoral promises", and a propaganda machine will "invade the daily life and even the peace of homes". In his homily, Cardinal Poli quoted some statements by Pope Francis related to politics and his service to the common good, as well as texts of Blessed Monsignor Enrique Angelelli and of St. Pope Paul VI. Before concluding the Te Deum, President Macri thanked all those present and representatives of other religious confessions. (CE) (Agenzia Fides, 27/05/2019)
Posted by Jesus Caritas Est at 10:03 AM