Recommended Book "The Other Francis: Everything They Did Not Tell You about the Pope" by Deborah Lubov 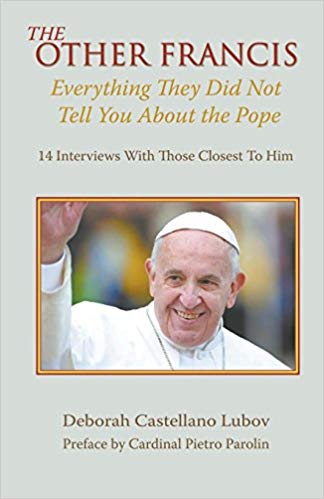 The Other Francis: Everything They Did Not Tell You about the Pope Paperback –
by Deborah Castellano Lubov (Author), Pietro Parolin (Preface)

In this book Deborah Castellano Lubov explores the personality and thinking of Pope Francis. Drawing on interviews with major figures in the Roman Curia and the universal Catholic Church, as well as with the friends and family of Jorge Mario Bergoglio, she presents a vivid portrait of the Pope, both as a man and in his treatment of current issues, particularly that of the dignity of the human person. The book contains an exclusive interview with the sister of the Pope, along with those closest to him: ● Maria Elena Bergoglio ● Cardinal Charles Maung Bo ● Cardinal Timothy Dolan ● Archbishop Georg Ganswein ● Cardinal Kurt Koch ● Archbishop Joseph Edward Kurtz ● Father Federico Lombardi ● Cardinal Gerhard Ludwig Muller ● Cardinal Wilfrid Fox Napier ● Adrian Pallarols ● Cardinal George Pell ● Rabbi Abraham Skorka ● Cardinal Peter Turkson ● His Beatitude Fouad Twal ************

Available from Amazon:
https://www.amazon.com/Other-Francis-Everything-They-about/dp/0852449348/
Review
THE EASE WITH which Pope Francis appeared to the world at the start of his papacy is something relatively new, and is shaping the Church from within. The friendship that the Pope shows for the Christian people--which is ultimately a desire to walk together--is the same friendship that he shows to those who have chosen to follow Christ in the priesthood and who need daily to be renewed by returning to the source of their mission. In the following interviews it will be no surprise to hear people, including some who hold high office in the Church, share the amazing effect of their personal encounters with Francis. They feel themselves welcomed by a look, by Francis's look, so full of affection and mercy, sentiments that give rise to our sense of human dignity. Pietro Cardinal Parolin, Secretary of State
About the Author
DEBORAH CASTELLANO LUBOV is the Vatican correspondent for ZENIT International News Agency. Accredited to the Holy See Press Office, she works with the National Catholic Register, Our Sunday Visitor, Catholic World Report, Terra Santa and Libreria Editrice Vaticana as well as with Salt & Light Television, EWTN, and NBC Universal. She contributed to Il Vocabolario di Papa Francesco (The Vocabulary of Pope Francis, published in two volumes by Elledici) along with 50 prominent Vatican authors and journalists, including the Vatican Secretary of State, Cardinal Pietro Parolin. In the first volume, she addressed the theme of Creation and, in the second, that of Angels. She has done commentary for various media, including television and radio. Deborah lives in Rome with her husband, Paolo Fucili. Based in the Eternal City, but frequently travelling, she often covers the Pope's international visits including occasional participation on the papal flight.
Posted by Jesus Caritas Est at 9:13 AM