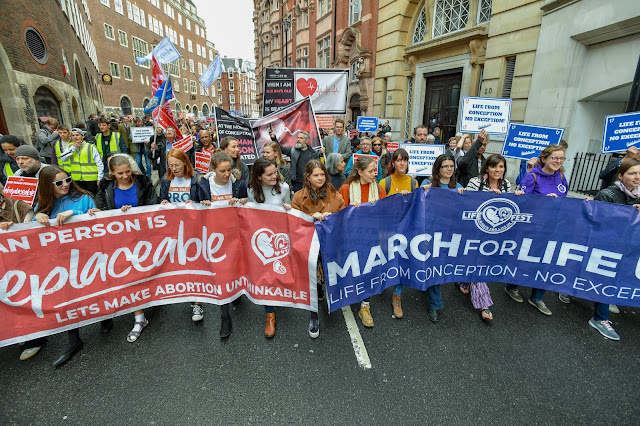 On Saturday, May 11, 2109 a crowd of over 5,000 people gathered at the March For Life to counter extreme abortion legislation in the UK.
Thousands of people from across the UK attended the March For Life UK in London. The March finished in Parliament Square where the crowd was addressed by a line-up of keynote speakers including;
abortion survivor Melissa Ohden and president of Culture of Life Africa Obianuju Ekeocha.
Carla and Danny who recently changed their minds about having an abortion outside a Marie Stopes clinic in Birmingham also spoke to the crowd.

The March comes as abortion campaigners increase pressure on Westminster to introduce abortion on demand to Northern Ireland and to make extreme changes to abortion legislation in England and Wales.


“I am standing here with you today as a wife, a mother, a daughter, a sister, a Master’s level prepared social worker, and yes, as an abortion survivor. You would never tell by looking at me today, but 41 years ago, I survived a “failed” saline infusion abortion.

“In my work as the founder of The Abortion Survivors Network, I have had contact with 286  other abortion survivors, including five from the U.K., four of whom are still alive today.

“Despite the miracle of my survival, the doctor’s prognosis for my life was initially very poor. My adoptive parents were told that I would suffer from multiple disabilities throughout my life. However, here I am today, perfectly healthy. Whether I had lived with the expected disabilities or not, my life still deserved to be protected and respected, I still was worthy of the love that my family freely offered.

“I am here to lament about the human rights issue of our time. Abortion in this country has been legal now for more than 50 years and has taken the lives of more than nine million people.

“We are all gathered here today in this special venue because we have come to raise our voices to this parliament, because this parliament has it wrong."

Edited from Press Release by March for Life UK