10,000 people at Prayer in "Awakening Europe" - with former Chancellor of Austria and Cardinal Shoenborn 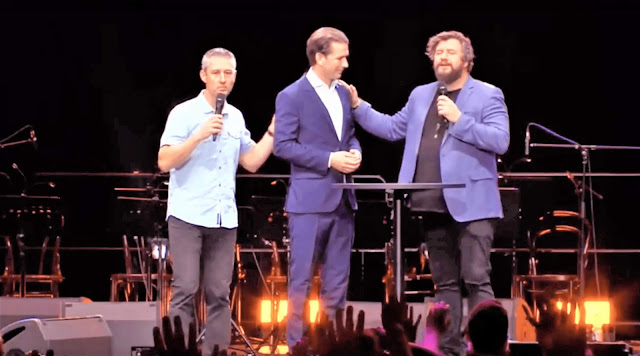 Former Chancellor of Austria, Sebastian Kurz paid a visit to "Awaking Europe" in Vienna.
"Awakening Europe" is the name of an event in Vienna that gathered for four days with over 10,000 Christians in the Wiener Stadthalle. Speakers included Catholic Cardinal Schoenborn and Dr. Gudrun Kugler.
Sebastian Kurz, former Chancellor of the Republic of Austria, visited the event. Only a few knew about it in advance, it became known only on Sunday just before the arrival of the ex-chancellor.

Sebastian Kurz spoke only a few brief but friendly greetings. He was already leaving the scene when Ben Fitzgerald, evangelical pastor from Australia and leader of Awakening Europe, had the impulse to pray for Kurz. . Ben Fitzgerald also invited the 10,000 participants of the event to pray for the young politician.

Kurz had already been present three years ago at a similar event, the march for Jesus in Vienna - incidentally, as well as the "Awakening".


A prayer by Ben Fitzgerald, who has undergone a radical conversion to Christ and is a full-time worker who preaches the gospel around the world, has a special gift.

Posted by Jesus Caritas Est at 8:59 AM