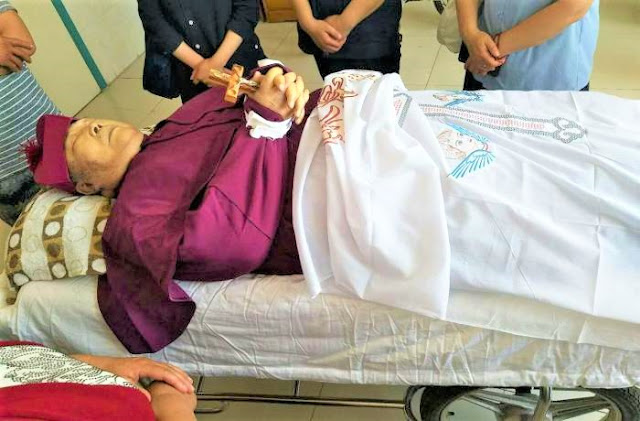 No public funeral for Msgr. Stefano Li Side, bishop of Tianjin
by Wang Zhicheng
The underground bishop died on June 8. FHe had been exiled to a mountain village under house arrest since 1992. But many official priests have expressed obedience to him. Bishop Li suffered years of imprisonment for refusing to belong to the Patriotic Association and 17 years of forced labor camps.


Tianjin (AsiaNews) - No public funeral is scheduled for Msgr. Stefano Li Side, bishop of Tianjin, recognized by the Holy See, but not by the government. Bishop Li died Saturday, June 8, after a long illness, at the age of 92. The Patriotic Association, to which Msgr. Li had always refused to belong, has forbidden the burial of his body in the Catholic cemetery.

The faithful of the Tianjin underground community are currently negotiating with the local government for a possible funeral ceremony at the city level. One of the faithful told AsiaNews that "the local government is much more civil than the PA". Until now, permission has only been given to carry out masses and funeral orations in every church of the diocese. The body of the bishop, after his death, was placed in a funeral parlor (a lay mortuary) and not in the cathedral of St. Joseph (Xikai) in Tianjin.

Two days ago, some underground priests who wanted to pay homage to the bishops remains were allowed to enter the funeral parlor and hold a funeral prayer for only 10 minutes. This morning they were not allowed to take part in mass in church.

Msgr. Stefano Li Side was born on 3 October 1927 in Zunhua (Tangshan, Hebei), from a long-established Catholic family, with six brothers and sisters. From childhood he felt the vocation to consecrate himself to the Lord and in 1940 he entered the local minor seminary. In 1945 he moved to the minor seminary in Tianjin; in 1949 he entered the major seminary of Wen Sheng in Beijing and on July 10, 1955 he was ordained a priest of the Diocese of Tianjin.

Following Mao Zedong's seizure of power and the launch of the Patriotic Association, to control the Church and create an "independent" community, he was arrested in 1958. Released on 16 February 1962, he returned to service in the cathedral of Saint Joseph in Tianjin, but was again arrested and imprisoned in 1963 until 1980, sentenced to forced labor camps.

Returning again to the Cathedral of St. Joseph, on June 15, 1982 he was ordained bishop of the Diocese of Tianjin in secret, but he was not recognized by the government. In 1989, after his participation in the Assembly of the Chinese Bishops' Conference at Zhang Er Ce - which asked the government for greater religious freedom - he was imprisoned for the third time. In 1991 he was released and returned to St. Joseph's Cathedral in Tianjin. In 1992 he was forced by the authorities to move to the village of Liang Zhuang Zi, in the mountains, in the Ji Xian district (Tianjin), under house arrest, where he remained until his death.

Since 1992, the government has succeeded in placing Msgr. Giuseppe Shi Hongchen as official bishop of Tianjin. Msgr. Shi Hongchen came from the underground Church and was ordained auxiliary bishop precisely by Msgr. Li in 1982. He died in 2006. Since 2007, most of the priests of the official Church have expressed obedience to Msgr. Li Side. Tianjin Church also has a coadjutor bishop (underground), Msgr. Melchiorre Shi Hongzhen, 92, also under house arrest in the region's mountains.

********************************
Dear Reader, You can help us continue by any Donation to Catholic News World, a Mission, which brings the Gospel to over 200 Countries World Wide!  Just Click the LINK below and use the scrolls to choose your amount and currency any amount helps.
If you do not support Christian media who will - bringing you stories from a Faith perspective that are often ignored by Media - Will you Help us Continue?
Every little bit helps - as a Donor you and your Family will be added to our Church Prayers -
You can add your prayer intention on the Donation site "Donor Wall"
Thanks and God bless!
https://donorbox.org/support-catholic-news-world-we-need-
Posted by Jesus Caritas Est at 9:13 AM

May the soul of the faithful precious child of God Rest in Peace!Amen!!!

May the angels welcome him to the bossom of Abraham! Rest in peace!

China, You are going to declared war with God. This is not good for you. If you continued the same you will suffer the consequences of the result.

Rest in peace Our Hero Bishop

Rest in peace
Father Bishop Stefano Li Side!
The Hero

This last week my thought and prayers increased for China and the persecuted catholics. Maybe this is why, i just now hear of this martyr's death, died on the eve of St columbkille and St Emphrem, HARP OF THE HOLY GHOST. In 1987 i took Fr. Patrick Scanlan to Fatima Portugal. He was 91 years of age. He once had a PARISH IN CHINA, and all were martyred. He lived to age 101, PERRIS CALIFORNIA.

Rest in peace to China Bishop Fr.Stefano Li Side🙏

ETERNAL REST GRANT UNTO Bp. STEFANO LI SIDE, OH LORD. AND LET PERPETUAL LIGHT SHINE UPON HIM,
MAY HE REST IN PEACE WITH THE LORD ALMIGHTY. AMEN.

Dear China
Lord still loving you all.. but you still prosecuting to Jesus.. RIP for bishop..

We thank God for the life of late Rt Rev Bishop for having steadyfast for his faith and love of God and his Son Jesus Christ which lead him to be imprisoned to death. Angels of heaven recieve his soul and for us who are left on earth struggle to spread the goodnews to the communist countries to accept that God is only the way to the kingdom of heaven not even earthly resources. Bishop rest in peace and Chinese official change your hearts towarss to God. Amen.

RIP BISHOP, BUT LETS PRAY FOR OUR BROTHERS AND SISTERS IN CHINA

RIP BISHOP, BUT LETS PRAY FOR OUR BROTHERS AND SISTERS IN CHINA

a brave soul. May you rest in peace Bishop.

RIP BISHOP. MAY THE LORD CHANGE THE HEART OF GOVERNMENT OF CHINA, AMEN.

Rest in peace Bishop of Tianjin, Msgr Stefano Li Side. Eternal rest grant unto him O Lord, and let perpetual light shine upon him.

May our Almighty God welcome you in his kingdom. May you rest in peace Bishop Stefano Li Side������

May his soul rest in peace 🙏

May the soul of Bishop Stephan SD Lee, the faithful servant of God, rest in the eternal peace with the given glorious crown of Heaven and the eternal light shine upon him! --JL