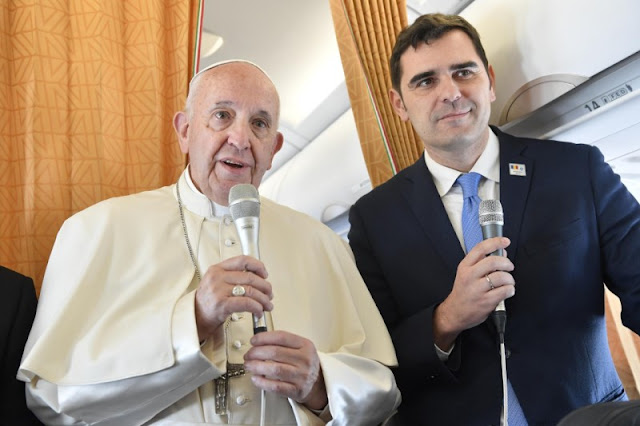 Pope Francis addressed a number of topics during the return flight from his 3-day trip to Romania. The pope spent about 35 minutes with reporters on the short flight, answering five questions.
“If Europe does not look well at the challenges ahead, Europe will wither, it will be withered.,” Pope Francis said in response to a question about recent trends in European politics. Asked about groups “that do not desire fraternity” but “prefer to go it alone,” the Pope said Europe needs to “take up again the mysticism of the founding fathers." Europe needs "to be itself," to rediscover "its own identity, its own unity," in order to overcome "divisions and borders.” He acknowledged that nations have their own proper identity, which they must protect; but, he continued, “with the mysticism of the polyhedron.” There is a “globalization,” he said, “where all cultures are respected, but all are united.”

According to CNS, Pope Francis said that he continues to visit retired Pope Benedict XVI, 92, who is like a grandfather who continues to encourage him and give him strength. "I take his hand and let him speak. He speaks little, at his own pace, but with the same profoundness as always. Benedict's problem are his knees, not his mind. He has a great lucidity."

CNS further reported that the Holy Father said where there is tension or conflict, the pope said, Christians must have "a relationship with an outstretched hand." "We must go forward together," he said, "always keeping in mind that ecumenism isn't about arriving at the end of the game. Ecumenism means walking together, praying together, an ecumenism of prayer."

Christians also share "an ecumenism of blood, an ecumenism of witness and what I call 'an ecumenism of the poor' -- working together to help the sick, those who are on the margins." Pope Francis said that that Chapter 25 of St. Matthew's Gospel -- where Jesus says those who feed the hungry, clothe the naked, visit the sick and prisoners do the same for him -- "is a good ecumenical program."
"It is possible! It is possible to walk together in unity, fraternity, hand outstretched, thinking well of each other, not speaking ill of others," he said.
At the end of the press conference, Pope Francis said he was grateful for the rain, which allowed him to see “the beautiful landscape of Romania.” He concluded with a request for “believers” among the journalists “to pray for Europe, for unity, that the Lord will give us grace.” And to those who are not believers, he said “hope for good will, a heartfelt best wish, the desire that that Europe might once again be the dream of the founding fathers.”
Edited from Vatican News.va and Catholic News Service
********************************

DONATE Now to Catholic News World, a Mission, which brings the Gospel to over 200 Countries World Wide! Easy Just Click the LINK below!
If you do not support Christian media who will?
Every little bit helps - as a Donor you and your Family will be added to our Church Prayers - You can add your prayer intention on the Donation site "Donor Wall":
https://donorbox.org/support-catholic-news-world-we-need-
Posted by Jesus Caritas Est at 10:18 PM