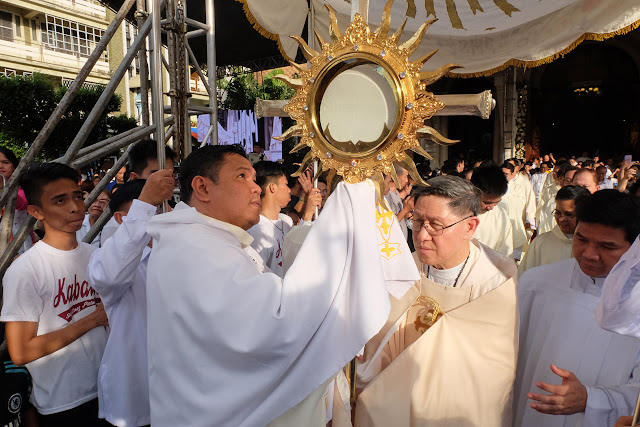 The head of Manila’s Roman Catholic Church of Manila berated Catholics who go to church but don’t live out to God’s teachings.

On the feast of Corpus Christi on Sunday, Cardinal Luis Antonio Tagle spoke about hypocrisy, especially those who are active in the church but don’t do good deeds.

“Some people go to Mass but are traitors. They go to adoration but are indifferent and don’t share with others,” Tagle said in his homily at the Sta. Cruz Church.

The cardinal said that the feast is a special opportunity for people to revive their faith in the real presence of Jesus in the Eucharist.

“Through our sharing, hopefully the presence of Jesus will be more felt, seen, and experienced by people who go through dark nights of betrayal and indifference,” he said.

The cardinal also lamented many people’s indifference to ecological protection, which he described as “God’s gifts”.

He cited, for instance, the piles of trash that devotees left on the streets during huge religious events.

“When we are supposed to give thanks to God, we also show our lack of care to His gifts,” Tagle said.

“I’m appealing to everyone to protect our environment because it’s God’s gifts to us. Gifts are appreciated and should not be destroyed,” he said.

Following the Mass, a procession with the Blessed Sacrament was held from Sta. Cruz to the Manila Cathedral.

The solemnity of the “Body of Christ” is traditionally celebrated on the Sunday following the Trinity Sunday or, in some countries on the Thursday following that feast.

Cardinal Tagle said the feast provides an opportunity for the faithful to focus on Christ’s real presence in the Eucharist.
FULL TEXT Source: By Roy Lagarde
CBCP News - Bishops of the Philippines
Posted by Jesus Caritas Est at 12:09 PM