Crowds at Corpus Christi Procession in Brisbane, Australia with Many Youth and young Families 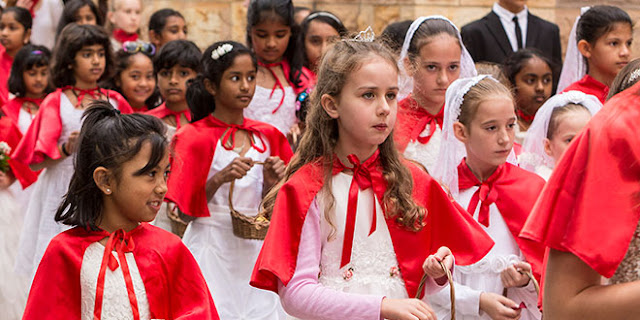 According to the Catholic Leader crowds of Brisbane Catholics in Australia were on the streets to celebrate the Real Presence on the Feast of Corpus Christi. The people were publicly adoring and testifying the Real Presence in the Blessed Sacrament on the Solemnity of the Most Holy Body and Blood of Christ (Corpus Christi) last Sunday, June 23, 2019.

Oratory Father Adrian Sharp said it was a great day with an impressive crowd.

He said it was nice to see different parish and ministry groups flying their banners, and the significance of the occasion wasn’t lost.

“It’s a chance to give thanks to God for the gift of the Eucharist,” Fr Sharp said.

“It allows us to thank God for that but also give a public witness to our faith in the Real Presence in the Blessed Sacrament.


“And (it was) also sort of a visible sign of prayer for the city – the archdiocese – to honour our Lord in that way and to ask Him to be with everyone and guide everyone.”

Fr Sharp said it was pleasing to see a good number of people also took the opportunity to go to Reconciliation (Confession) in the afternoon.

Corpus Christi organising committee member Michelle Adeney said it was a beautiful experience as it always was.

Mrs Adeney echoed Fr Sharp’s comments, saying lots of people enjoyed the opportunity to witness to their faith publicly and in the Real Presence.

“I think it helps people’s faith to build – it’s a faith-building thing to do it,” she said.

“It’s one of those traditions that is good to have that makes people feel warm about their faith and makes them pleased to be a Catholic and faith-building, increases devotion I’d say.

“I think it’s because you’re doing something other than attending Mass that supports your attendance at Mass.

Mrs Adeney said there were also “heaps of youth”, saying the parade was predominantly teenagers and young families.
And it wasn’t only Catholics who got something out of the event, as Mrs Adeney said it was a great chance to do some “street evangelisation”.

“It certainly draws a lot of attention,” she said, “not hordes and hordes but there were quite a lot of people taking photos and watching.

“Part of the procession is we always have some people handing out information if people are asking what they’re doing – it’s a chance to do a bit of street evangelism, literally.

“We have the guard of honour on the sides of the Blessed Sacrament, but all the way up on either side there are people who are happy to talk about what’s happening today and share and witness.”

The Feast of Corpus Christi dates back to St Juliana of Mont Cornillon, in the 13th Century, who had a vision eluding to the need for the feast.

Fr Sharp recalled a story he was told on the feast this year, which discussed the origin of the Office for the occasion.

It was said when the feast was decreed to become a universal feast, Pope Urban IV requested a new Mass be composed and he called upon St Thomas Aquinas and St Bonaventure to write one each.

Fr Sharp said they both composed a text for the Mass and brought it before the pope. “Thomas Aquinas and Bonaventure both presented their text to the pope and the pope must’ve asked Thomas Aquinas to present his first,” he said.

“And upon hearing it, Bonaventure ripped his up.”

Devotion: Catholics from across Brisbane archdiocese gathered to march and profess their faith in the Real Presence in the Blessed Sacrament on the Feast of Corpus Christi, June 23.
Fr Sharp said the text that St Thomas wrote was still the one we used today.

“I hadn’t heard (the story) before,” he said, “We’ll never know what Bonaventure actually wrote because he tore it up.”

Adeney said there were also “heaps of youth”, saying the parade was predominantly teenagers and young families.

Fr Sharp said it was a celebration that belonged to the whole diocese, full of music from the cathedral and the parishes, and full of the colours of the wide Church.
Edited and Shortened from a report by the Catholic Leader by Joe Higgins with image share from the Catholic Leader - Photo: Alan Edgecomb
Posted by Jesus Caritas Est at 10:06 AM