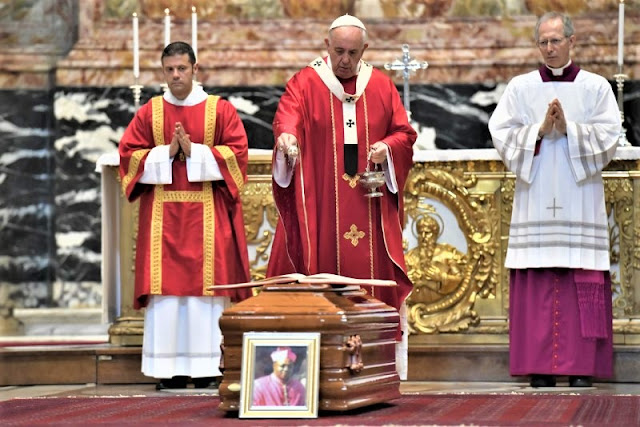 CELEBRATION OF THE FUNERAL OF ARCHBISHOP LÉON KALENGA BADIKEBELE,
TITULAR ARCHBISHOP OF MAGNETO, APOSTOLIC NUNCIO TO ARGENTINA
HOMILY OF HIS HOLINESS POPE FRANCIS


Altar of Cathedra of the Vatican Basilica
Saturday, 15 June 2019

This Eucharist finishes with the prayer of the valedictio, that is the adieu: “saying adieu” to the brother. It is like saying: we let you go to God, to go to the hands of God. The Bible tells us in the Book of Wisdom that the spirit of the righteous is in the hands of God (cf. 3: 1). The hands of God, which are the most beautiful hands, wounded with love, hands wounded with love. And we entrust our brother to the hands of God.
And this is also a farewell prayer, and more: the farewell of the pastor. The pastor takes leave of his people, his flock. Just as Paul did in Miletus, before the elders of Ephesius, weeping (cf. Acts 20: 17-38). They all wept, they threw their arms around his neck, they kissed him before he boarded the ship. The farewell of the pastor. The pastor says farewell with his own witness: “You know how I lived the whole time I was with you” (v. 18). This is my life, he says to the flock – you judge. Witness. The pastor takes leave of them showing that his life was a life of obedience to God: “And now, compelled by the Spirit, I am going to Jerusalem” (v. 22). It is the Spirit that has led me and leads me; it is like the column that supports the life of the pastor.
The pastor says farewell also with witness of detachment: he is used to being unattached to the goods of this world, to being unattached to worldliness. “Now I know that none of you … will ever see me again. Therefore, I declare to you today that I am innocent” (cc. 25-26), of so many things, and he detaches from them. As if to say, “now you are adults”. “Keep watch over yourselves and all the flock” (v. 28). Keep watch, fight, be adults, I will leave you alone, go forth.
Then, as a brother and father, the pastor says farewell with prophecy. Be careful, beware because “after I leave, savage wolves will come in among you and will not spare the flock” (v. 29). He indicates the path, and how to defend themselves alone without their pastor.
At the end he prays, “Now I commit you to God” (v. 32), and kneeling, with his priests, he prays.
This is the pastor’s farewell, which Paul lived so strongly in Miletus. And today, let us think of all these things, and perhaps our brother Léon will tell us, and will tell his people, his people of Argentina, of Salvador, in many places where he went: “Now I commit you to God”.
And we have also heard another farewell, the farewell of Jesus, which is a farewell in hope. “I am going there to prepare a place for you (Jn 14: 2). The separation is provisional, it is temporary. “I am going ahead, the flock will come afterwards. I am going to prepare a place for you”. That is, i am going where I would like you all to arrive, at that point”. “I am going there to prepare a place for you”: it is hope. Spirituality, that at least we have learned in the novitiate, tells us that all life is a path to learn how to die. This was fine in that eighteenth-century spirituality that was rather… I like to say, life teaches us how to take leave. Learning to take leave. And to see how the pastors say farewell, such as Jesus, such as Paul, like so many, like Léon, they all take leave of us. We too can learn: taking steps to say farewell, little farewells as we change mission, and the great farewell at the end. May the Lord grant us all this grace: to learn how to say take our leave, which is a grace of God.
*Bulletin of the Holy See Press Office, 15 June 2018