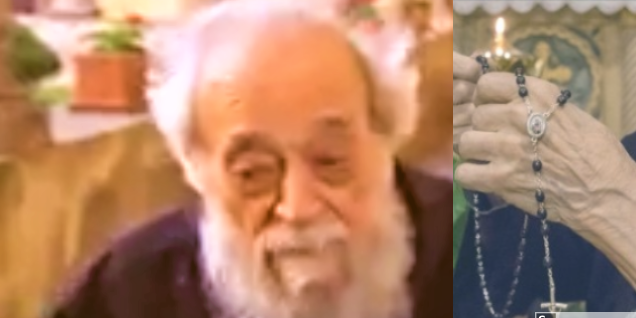 On the morning of Wednesday 22 May 2019,  Fr. Giuseppe Ungaro, Franciscan priest, died at the age of 99. He concluded his earthly journey, at the Hospital of Padua,

His funeral was celebrated in Padua at the Basilica del Santo on Friday 24 May, 2019.

Fr. Giuseppe, who was baptized in the shrine of Arcella (the place where St. Anthony passed away), was born on May 27, 1919.

In 1972 he created the Wardrobe for the Poor, a sort of charity outlet consisting of a large hall filled with shelves with items, all free for the poor.
In his long life Fr. Giuseppe has had the great privilege of knowing seven saints: St. Padre Pio, St. Leopold Mandić, St. Maximilian Kolbe, St. Pope John Paul I, St. Pope John XXIII and St. Pope John Paul II, as well as St. Pope Paul VI. (according to the video below)
The St. Anthony Messenger quoted him, “I wanted to become a missionary,” Fr. Giuseppe recalls, “but it was actually Padre Pio, during confession, who predicted that my destiny was to remain in Italy. Padre Pio could be abrupt at times, but this was only with those who approached him out of mere curiosity; with people of genuine faith he was a gentle, fatherly figure. I remember that I once took his hands and kissed them, asking if the stigmata were painful, and he replied, ‘Well, God didn’t give them to me as an enjoyment!’”
Fr. Giuseppe also has definite memories of Fr. Maximilian Kolbe. He was impressed by the Polish friars’ meekness when he met him during his stay in the friary of the Basilica of St. Anthony in Padua. “He had just returned from Japan, and was very sad because of a humiliation he had experienced there. Despite this he still had great faith and a great love for Our Lady. It was Maximilian who encouraged me to make a vow to Our Lady: that of giving up smoking, and from that day I quit forever.”
Fr. Giuseppe also had a personal relationship with Pope John XXIII. This occurred when he was parish priest in the famous Frari Basilica in Venice, and Roncalli was Patriarch of the city. “One day I was asked to confess an Orthodox priest I knew, who was dying. After confession that priest asked me to give him Holy Communion. Not knowing what to do I turned to the Patriarch, who told me, “Some things are done without permission because the sacraments are there to serve humanity. If you ask permission from Rome you’ll get a response in maybe three years from now. By that time the poor priest will be dead and the response from Rome may even be a negative one!”
Fr. Giuseppe also preached to and celebrated Mass with Popes Paul VI and John Paul II.
Edited from http://www.francescaninorditalia.net/aggiornamenti/news/749-lutto-provinciale-fr-giuseppe-ungaro
http://www.messengersaintanthony.com/content/97-candles
Posted by Jesus Caritas Est at 3:47 PM

May you rest in eternal peace in heaven Amen

Thank your for your yes to your service for God may you rest in joy & peace with all the saints & the heavenly body.RIP.

T be nice if video was in english.