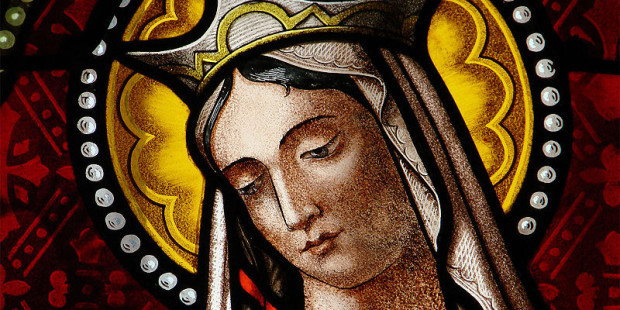 Born:
475, Lyon, France
Died:
545, Tours, France
Patron of:
brides, adopted children, parents, exiles, widows
Was daughter of Chilperic, younger brother to Gondebald, the tyrannical king of Burgundy, who put him, his wife, and the rest of his brothers, except one, to death, in order to usurp their dominions. In this massacre he spared Chilperic's  two fair daughters, then in their infancy. One of them became afterwards a nun; the other, named Clotildis, was brought up in her uncle's court, and by a singular providence, was instructed in the Catholic religion, though she was educated in the midst of Arians. It was her happiness in the true faith, to be inspired from the cradle with a contempt and disgust of a treacherous world, which sentiments she cherished and improved by the most fervent exercises of religion. Though she saw herself surrounded with all the charms of the world, and was from her infancy its idol, yet her heart was proof against its seductions. She was adorned with the assemblage of all virtues; and the reputation of her wit, beauty, meekness, modesty, and piety, made her the adoration of all the neighboring kingdoms, when Clovis I., surnamed the great, the victorious king of the Franks, demanded and obtained her of her uncle in marriage granting her all the conditions she could desire for the free and secure exercise of her religion.1 The marriage was solemnized at Soissons, in 493. Clotildis made herself a little oratory in the royal palace, in which she spent much time in fervent prayer and secret mortifications. Her devotion was tempered with discretion, so that she attended all her business at court, was watchful over her maids, and did every thing with a dignity, order, and piety, which edified and charmed the king and his whole court. Her charity to the poor seemed a sea which could never be drained. She honored her royal husband, studied to sweeten his warlike temper by Christian meekness, conformed herself to his humor in things that were indifferent; and, the better to gain his affections, made those things the subject of her discourse and praises in which  she saw him to take the greatest delight. When she saw herself mistress of his heart, she did not defer the great work of endeavoring to win him to God, and often spoke to him on the vanity of his idols, and on the excellency of the true religion. The king always heard her with pleasure; but the moment of his conversion was not yet come. It was first to cost her many tears, severe trials, and earnest perseverance. After the baptism of their second son, Clodomir, and the infant's recovery from a dangerous indisposition, she pressed the king more boldly to renounce his idols. One day especially, when he had given her great assurances of his affection, and augmented her dowry by a gift of several manors, she said she begged only one favor of his majesty, which was the liberty to discourse with him on the sanctity of her religion, and to put him in mind of his promise of forsaking the worship of idols. But the fear of giving offence to his people made him delay the execution. His miraculous victory over the Alemanni, and his entire conversion in 496, were at length the fruit of our saint's prayers.

Clotildis, having gained to God this great monarch, never ceased to excite him to glorious actions for the divine honor: among other religious foundations he built in Paris, at her request, about the year 511, the great church of SS. Peter and Paul, now called St. Genevieve's. This great prince had a singular devotion to St. Martin, and went sometimes to Tours, to prostrate himself in prayer at his tomb. He sent his royal diadem, which is called, to this day, The Realm, a present to pope Hormisdas, as a token that he dedicated his kingdom to God. His barbarous education and martial temper made it, in certain sallies of his passions, difficult for Clotildis to bridle his inclination to ambition and cruelty, so that he scarce left any princes of his own relations living, except his sons. He died on the 27th of November, in the year 511, of his age the forty-fifth, having reigned thirty years. He was buried in the church of the apostles, SS. Peter and Paul, now called St. Genevieve's, where his tomb still remains. An ancient long epitaph, which was inscribed on it, is preserved by Aimoinus, and copied by Rivet. His eldest son Theodoric, whom he had by a concubine before his marriage, reigned at Rheims over Austrasia, or the eastern parts of France, which comprised the present Champagne, Lorraine, Auvergne, and several provinces of Germany. Metz was afterwards the capital of this country. As to the three sons of Clotildis, Clodomir reigned at Orleans, Childebert at Paris, and Clotaire I., at Soissons. This division produced wars and mutual jealousies, till, in 560, the whole monarchy was reunited under Clotaire, the youngest of these brothers. St. Clotildis lived to see Clodomir defeat and put to death Sigismund, king of Burgundy; but soon after, in 524, himself vanquished and slain by Gondemar, successor to Sigismund; Gondemar overcome and killed by Childebert and Clotaire, and the kingdom of Burgundy united to France. The most sensible affliction of this pious queen was the murder of the two eldest sons of Clodomir, committed in 526, by their uncles Childebert and Clotaire, who seized on the kingdom of Orleans. This tragical disaster contributed more perfectly to wean her heart from the world. She spent the remaining part of her life at Tours, near the tomb of St. Martin, in exercises of prayer, almsdeeds, watching, fasting, and penance, seeming totally to forget that she had been queen, or that her sons sat on the throne. Eternity filled her heart, and employed all her thoughts. She foretold her death thirty days before it happened; having been admonished of it by God at the tomb of St. Martin, the usual place of her tears. In her last illness, she sent for her sons Childebert, king of Paris, and Clotaire, king of Soissons, and exhorted them, in the most pathetic manner, to honor God and keep his commandments; to protect the poor, reign as fathers to their people, live in union together, and love and study always to maintain tranquillity and peace. She scarce ever ceased repeating the psalms with the most tender devotion, and ordered all she had left to be distributed among she poor; though this was very little; for she had always been careful to send her riches before her by their hands. On the thirtieth day of her illness she received the sacraments, made a public confession of her faith, and departed to the Lord on the 3d of June, in 545. She was buried, by her own order, in the church of St. Genevieve, at the feet of that holy shepherdess, and is commemorated in the Roman Martyrology on the 3d of June. See St. Gregory of Tours, Hist. Franc., and Fortunatus; and among the moderns, Abbe Du Bos and Gilb. le Gendre, Antiquites de la Nation et Monarchie Francoise, & c. Text : Lives of the Saints by Alban Butler
Prayer to St. Clotilde (Angelfire)
Hail, gentle and loving St. Clotilde, sweet illustrious Queen of the Franks, who by thy faith and perseverance in the Lord didst convert thy husband and made France for many centuries a venerable stalwart of the Catholic faith, I implore thy powerful intercession in this my great need.
Assist me, holy St. Clotilde, from thy height of glory in heaven. Thou, who during thy earthly sojourn, didst drink deeply from the Saviour's chalice of sorrows, have pity on my dire distress, especially . . . (Here make your intention).
Grant also that through my sorrows I may, like thee, purify my faith and never lose hope in the mercy of God. Amen.

Posted by Jesus Caritas Est at 7:15 AM