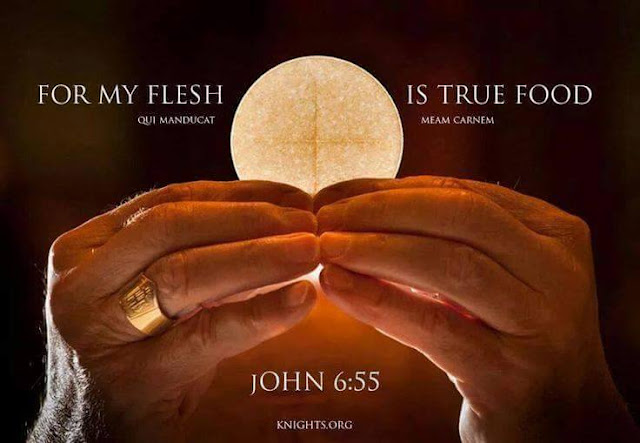 1. What is this Sacrament called?
The word EUCHARIST comes from the Greek noun εὐχαριστία (eucharistia), meaning thanksgiving. In the New Testament of the Bible we find Jesus establishing the Eucharist. At Holy Mass (Church Service) Catholics receive Jesus under the appearance of bread from the Priest; this is the Body and Blood of Christ.  We believe that this transubstantiation happens because Jesus expained it in the Bible.
Bible basis: Now as they were eating, Jesus took bread, and after blessing it broke it and gave it to the disciples, and said, “Take, eat; this is my body. (Matt. 26:26)
CCC 1328 The inexhaustible richness of this sacrament is expressed in the different names we give it. Each name evokes certain aspects of it. It is called: Eucharist, because it is an action of thanksgiving to God. The Greek words eucharistein and eulogein recall the Jewish blessings that proclaim - especially during a meal - God's works: creation, redemption, and sanctification.
CCC1330 We speak of the Most Blessed Sacrament because it is the Sacrament of sacraments. The Eucharistic species reserved in the tabernacle are designated by this same name.

The Eucharist is also called "Holy Sacrifice of the Mass", where the term "Mass" might be derived from the use of unleavened bread (in Hebrew: matzah).  Latin word missa (dismissal), is used at the end of Mass in Latin: Ite, missa est ("Go; it is the dismissal"). "Misa" came to mean a 'mission', since the congregation are sent out to serve Christ.
Bible Basis:
Then he took the bread, said the blessing, broke it, and gave it to them, saying, “This is my body, which will be given for you; do this in memory of me.” (Luke 22:19)
CCC 1332 Holy Mass (Missa), because the liturgy in which the mystery of salvation is accomplished concludes with the sending forth (missio) of the faithful, so that they may fulfill God's will in their daily lives.
CCC means Catechism of the Catholic Church
k

ShealTiel said…
1 CORINTHIANS 11:17-34 - "The Lord's Supper" - So then, everyone should examine himself first, and then eat the bread and drink from the cup. For if he does not recognize the meaning of the Lord's body when he eats the bread and drinks from the cup, he brings judgment on himself as he eats and drinks. That is "WHY" many of you are Sick and Weak, and several have Died. If we would examine ourselves first, we would not come under God's judgment. But we are judged and punished by the Lord, so that we shall not be condemned together with the world." - Reference: Good News Bible GNT
August 20, 2019 at 7:19 AM

ShealTiel said…
1 CORINTHIANS 10:16-17 - "The cup we use in the Lord's Supper and for which we give thanks to God: when we drink from it, we are sharing in the blood of Christ. And the bread we break: when we eat it, we are sharing in the body of Christ. Because there is one loaf of bread, all of us, though many, are one body; for we all share the same loaf." - Reference: Good News Bible GNT
August 20, 2019 at 8:35 AM