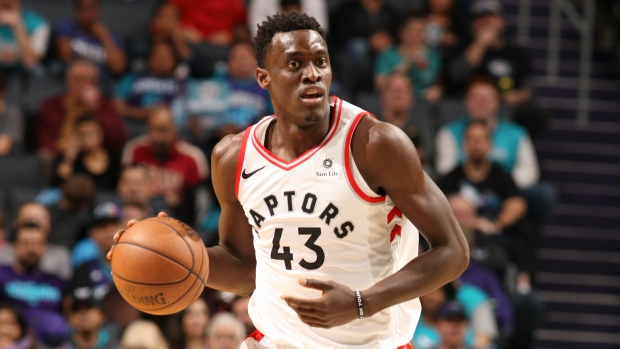 The Toronto Raptors are a Canadian professional basketball team based in Toronto, Ontario. The Raptors compete in the National Basketball Association (NBA), as a member club of the league's Eastern Conference Atlantic Division

Third-year Raptors forward Pascal Siakam is one of their best players; you can see him making the sign of the cross during the games.
According to Business Insider and ESPN, Siakam once studied to be a priest in Cameroon 10 years ago and playing organized basketball for the first time at 17, to breaking out after being the 27th pick in the draft.
Pascal Siakam stepped up to help the Toronto Raptors win Game 1 of the NBA Finals.
********************************

Be Kind today and Donate to Catholic News World, a Mission, which brings the Gospel to over 200 Countries World Wide! Easy Just Click the LINK below!
If you do not support Christian media who will?
Every little bit helps - as a Donor you and your Family will be added to our Church Prayers - You can add your prayer intention on the Donation site "Donor Wall":
https://donorbox.org/support-catholic-news-world-we-need-

Siakam, 25, has only been playing organized basketball since he was 17. He grew up in Cameroon and was "hand-picked to embody his family's Catholicism" by his father, according to ESPN's Jackie MacMullan. While Siakam's three older brothers also played basketball. Siakam studied in a seminary until around 15, then was no longer interested in becoming a priest.
Siakam earned a scholarship to New Mexico State, and after three years in college, was taken with the 27th pick in the 2016 NBA draft by the Raptors.

Faithwire reports that another Raptors' player, named Kawhi Leonard, had been doing a lot of praying himself. “I prayed every day,” he said
‘Yeah. Last year was a very down year for me. Was going through a lot, with everything that was going on,” Kawhi explained, referencing the injury and team change. “You know, God is good. I prayed every day, ended up getting healthy and now I’m playing basketball. You can see what He does for you.”
Posted by Jesus Caritas Est at 1:57 PM