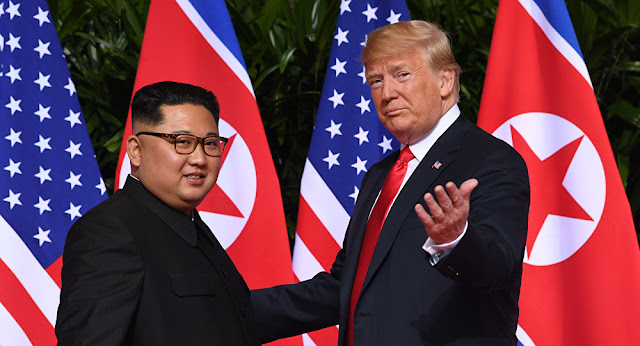 For the first time in history a US president traveled to North Korea.  This has anticipated a restart of denuclearization talks, which were stalled since February.  South Korea views this as a "turning point" in the peace process .
The North Korean state media are celebrating the meeting on June 30, 2019, between leader Kim Jong-un and US president Donald J. Trump as "historic" and "amazing".
It occurred in Panmunjom inside the Demilitarised Zone (DMZ), which for 66 years has divided the two Koreas.
Some critics say the meeting is nothing more than "a drama for publicity purposes".

Kim accepted the invitation to meet in the DMZ that Trump had extended the day before, during a 48-hour visit to South Korea for talks with President Moon Jae-in.  Kim and Trump shook hands on the concrete blocks that divide the North and the South, before Trump took a few steps into North Korean territory, becoming the first US president to set foot there.

The Korean Central News Agency (KCNA) - Pyongyang public news agency - reports today that the US president and Kim agree to "resume and carry out productive dialogues to take a new step forward in the denuclearization of the Korean peninsula".

"The top leaders of the DPRK and the US exchanging historic handshakes at Panmunjom" was an "amazing event", KCNA said, describing the truce village as a "place that had been known as the symbol of division".

A few hours after the pleasantries between Kim and Trump, the US secretary of state, Mike Pompeo, told reporters that he expected the North Korean denuclearization talks to resume in mid-July.

On table will be once again the dismantling of nuclear weapons and the regime's ballistic programs, in exchange for a loosening of the economic sanctions imposed by the international community.

Pompeo said he was "enthusiastic" about the imminent return to the negotiating table.  " "We think we do have a jumping-off point for these discussions, which have put us in a place where we can truly evaluate if there is a clear path forward," he said. "I've been listening to Chairman Kim today. I think there is."

Even South Korea, expressed satisfaction with the new developments as declared by the Unification Ministry of Seoul.  Spokesman Lee Sang-min states: "After yesterday, talks on denuclearization between the North and the United States should accelerate.  Our government will continue to strive to maintain the momentum towards dialogue and strengthen a virtuous circle between inter-Korean links, denuclearization and US-North Korea relations ".

Japan's Prime Minister Shinzo Abe points out that Tokyo "has been supporting the process since the first Trump-Kim summit in Singapore (in June 2018).  We hope that yesterday's meeting will push him even further ”.  Meanwhile, relatives of Japanese citizens kidnapped by North Korea state that the meeting between Trump and Kim has rekindled their hopes of solving the problem of their missing family members. (Edited from Asia News IT)
Vatican News reports that Pope Francis prayed for the meeting and was pleased.
“In these last few hours, we have seen in Korea a good example of the ‘culture of encounter,” Pope Francis said after the recitation of the Angelus on Sunday.
Posted by Jesus Caritas Est at 1:25 PM