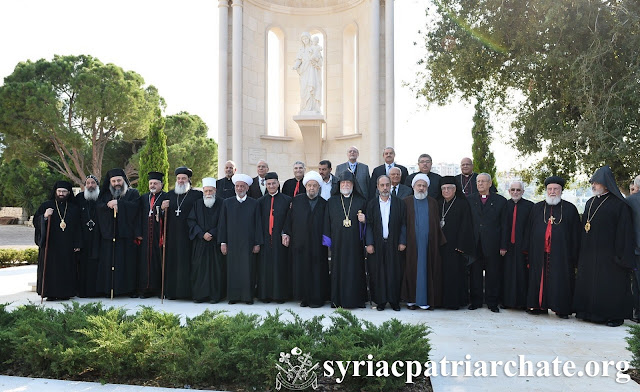 LEBANON 2019-07-31 Interreligious summit asks politicians to defend national unity against any sectarian drift
Beirut (Agenzia Fides) - The Lebanese national unit represents an indispensable guarantee to build a better future for Lebanon, and the coexistence among the different components of the population must be preserved from any threat connected to the resurgence of sectarian impulses and conflicts. This is the most significant emphasis contained in the final declaration of the interreligious spiritual summit convened on Tuesday, July 30 in Beirut, at the "House of Druze communities". The leaders of the Muslim Churches and Druze communities in Lebanon took part in the summit, and in their final communiqué they also appealed to political authorities to resolve as soon as possible the umpteenth political stalemate experienced by the government led by the Sunni, Saad Hariri, and guarantee the country the stability needed to face serious economic and social emergencies. Sheikh al-Aql Naim Hassan, Druse spiritual leader, asked President Michel Aoun to defuse all the threats that put at risk the principles of national coexistence defined in the Taif agreements, with which in 1989 the foundations were laid to put an end to the terrible years of the Lebanese civil war. The same recommendations were expressed also by Maronite Patriarch Bechara Boutros Rai and Sheikh Abdel Latif Darian, Mufti of the Lebanese Republic.
The concerns and solicitations expressed by Lebanese religious leaders should also be read in the light of the recent incidents that occurred in the province of Mount Lebanon, probably linked to the resurgence of ancient sectarian tensions. At the end of June, an incident occurred in the Qabr Chamoun area: in a firefight, two officers were killed. According to versions reported by the Lebanese media, the death of the agents were apparently due to the effect of an attack organized by a Druze faction to eliminate the influential foreign minister Gebran Bassil, who had canceled a visit at the last moment in the same region. According to Druze versions, the officers were killed after opening fire on some young men who were busy removing tires that had set on fire along the road. (GV) (Full Text source - Agenzia Fides, 31/7/2019)
Posted by Jesus Caritas Est at 9:42 AM