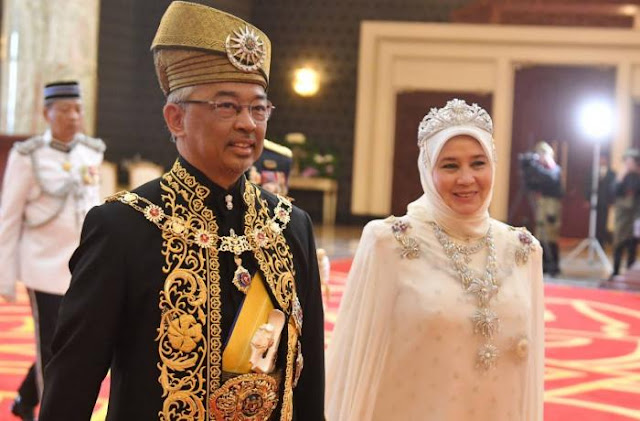 Sultan Abdullah installed as the 16th king of Malaysia
The ceremony was attended by about 700 guests including nine Malay rulers, government ministers and foreign dignitaries. Malaysia is a constitutional monarchy, in which the sovereign performs a largely ceremonial function. The king is elected in rotation: the throne passes from hand to hand every five years.

The royal couple entered Balairung Seri (the Throne Room) of Istana Negara (the National Palace) around 10.45 this morning. About 700 guests, including the nine Malay rulers, government ministers and foreign dignitaries, attended the ceremony broadcast live on state television.

Among the prominent foreign guests were Sheikh Mohamed Zayed Al-Nahyan, the crown prince of Abu Dhabi and Sultan Hassanal Bolkiah of Brunei.

Malaysia is a constitutional monarchy, in which the sovereign performs a largely ceremonial function. The king is elected in rotation: the throne passes from hand to hand every five years, through scrutiny between the rulers of the nine national states, presided over by the Islamic royal family.

Abdullah was proclaimed the sixth Sultan of Pahang on 15 January 2019, replacing his elderly and sick father. The Conference of Rulers elected him king on January 24th. He succeeds to the Sultan of Kelantan, Muhammad V, who resigned last January 6 after just two years on the throne. The renunciation of the throne, the first for Malaysia in modern times, followed the news of the latter's marriage with a former Russian beauty queen in November, during a two-month medical leave.
FULL Text + Image Source: ASIA NEWS IT
Posted by Jesus Caritas Est at 11:39 AM