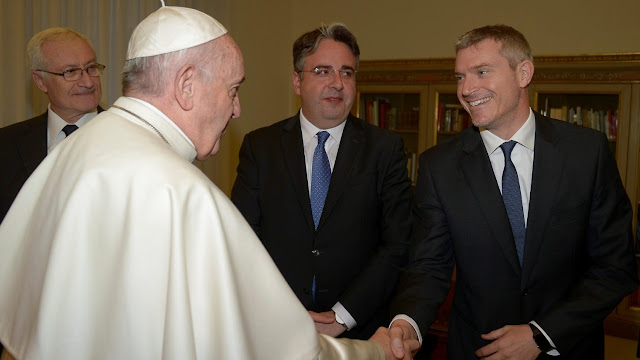 Born on 23 November 1976 in Winchester, Bruni graduated in modern and contemporary foreign languages and literature from Rome’s La Sapienza University.  He has been working since July 2009 at the Holy See Press Office, where he has been overseeing the accreditation of journalists and operational communications as coordinator of the Accreditation Section.

In this role, he has organized reporters accompanying the Holy Father on papal trips outside Italy.

Bruni has coordinated the participation of the press in the various events during the Jubilee of Mercy 2016.  He has long been involved in ecclesial projects of humanitarian cooperation and programmes to support the elderly.

The new spokesman of the Holy See is married and has a daughter. Besides Italian, he is fluent in English, Spanish and French.

Bruni takes over from Alessandro Gisotti, whom the Pope had appointed ‘ad interim’ Director of the Holy See Press Office on 30 December.

Also on Thursday, Pope Francis appointed Gisotti and Sergio Centofanti deputy directors of the Editorial Directorate of the Vatican Dicastery for Communication.

All three take office on 22 July.

Gisotti
A graduate of political science from Rome’s La Sapienza University and a professional journalist, Gisotti, 45, is married with two children.  After a stint at the United Nations Information Office in Rome, he began working at Vatican Radio in 2000.  From 2011 to 2016 he was deputy editor-in-chief at the Pope’s radio.   In 2017 he became the coordinator of the Social Media of the Vatican Dicastery for Communication.

He has taught journalism at the Jesuit Maximus Institute in Rome and theories and techniques of journalism at the Pontifical Lateran University. He has written several articles and essays on communication in the Church, in particular, the volume "The Decalogue of Good Communicator according to Pope Francis", published in 2016 with a preface by Cardinal Luis Antonio Tagle.

Centofanti
Born in Naples (Italy), Sergio Centofanti, 59,  is married with three children and has three grandchildren. He graduated in literature from Rome’s La Sapienza University in 1986.

Starting his career as a journalist in the early ‘80s, he worked with several newspapers and magazines.

He joined Vatican Radio in 1986, working for the first 10 years with the morning edition of world news in Italian.  He was gradually put in charge of other editions of the news service.   He has followed Popes John Paul II, Benedict XVI and Francis on various Italian and international trips.

In 2017 he was called to be part of the Multimedia Editorial Centre, in charge of coordinating the activities of the various language units of Vatican Radio-Vatican News.
FULL TEXT + Image Source: VaticanNews.va