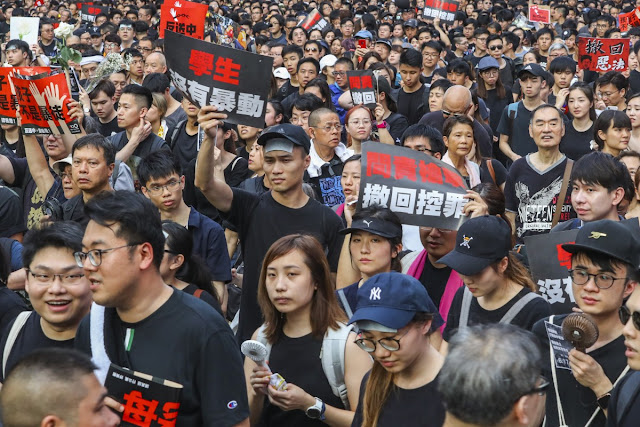 Anti-extradition march in Yuen Long without police authorisation
by Paul Wang
Organisers have criticised triad hooligan violence and police inaction. Last Sunday, thugs in white T-shirts attacked activists, injuring at least 45 people, whilst the police arrived only 40 minutes after the incident. Protesters plan a "memorial" for Li Peng and bypass the police ban.


Hong Kong (AsiaNews) – A march is planned for tomorrow ​​in Yuen Long, in the northern part of the New Territories, to protest the outbreak of violence against anti-extradition law activists last week at the Yuen Long MTR station.

Rally organisers plan to hold the protest march even though the police banned it, citing the risk of violence.

Last Sunday, after hundreds of thousands of people came together to demand the scrapping of the infamous extradition law.

Following the rally, a group of about 100 people, including members of local organised crime syndicates, dressed in white T-shirts and wielding iron bars and sticks, attacked protesters and pro-democracy activists. The latter were easily recognisable by their black T-shirts.

The thugs injured at least 45 people and, in their anger, attacked MTR passengers, including a pregnant woman.

March organisers and pro-democracy groups slammed the violence, but also complained about police indifference. The latter showed up only 40 minutes later, this despite emergency calls.

According to police, the people in white T-shirts came from villages near Yuen Long, but also included members of the 14K and Wo Shing Wo triad gangs.

Organisers suspect that the attack, as well as police absence, were planned, in order to sow division and fear in the anti-extradition front.

Police said that tomorrow’s rally might spark more violence between the two groups; for this reason, it was banned. But organisers plan to go ahead anyway, even at the risk of being accused of illegal gathering.

Meanwhile, march supporters have launched an online brainstorming to find ways to circumvent the police ban. Some have suggested holding a "memorial" for former Chinese Premier Li Peng, who died last Monday. Hong Kong’s Public Order Ordinance does not apply to gathering for funeral purposes, or religious or cultural discussions.

Every year, Hong Kong marks the Tiananmen massacre with a memorial rally. For this reason, Li Peng, premier at the time of the crackdown, is seen by many as one of the main culprits.
Full Text Source: AsiaNewsIT
Posted by Jesus Caritas Est at 2:06 PM