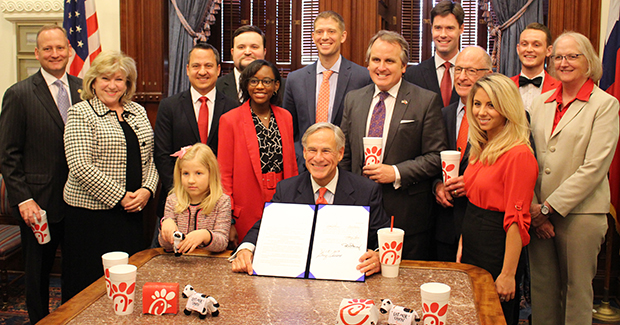 On July 18, 2019, Texas Governor Greg Abbott signed a law that prevents "adverse actions" against companies or people on the basis of their religious views or actions.
Texas Gov. Greg Abbott signed the bill with Chick-fil-A cups and a sandwich box around him.
"Discrimination is not tolerated in Texas," Abbott said.

State lawmakers recently tried to override an action by the San Antonio City Council in March, which voted against a Chick-fil-A restaurant at the municipal airport, citing the company's "legacy of anti-LGBTQ behavior."
Chick-fil-A is a private company, closes on Sundays, has often received adverse reactions to it religious beliefs. Its president, Dan Cathy, voiced support for "the biblical definition of the family unit" in 2012.

"No business should be discriminated against simply because its owners gave to a church,  or to the Salvation Army, or to any other religious organization. No business should lose a government contract because of their religious beliefs," Abbott said. "The 'Save Chick-fil-A' legislation that I'm about to sign is a victory for religious freedom in Texas."

@GregAbbott_TX
Today I signed the ⁦@ChickfilA⁩ law in Texas.

And, had a great lunch.

No business should be discriminated against simply because its owners donate to a church, the Salvation Army, or other religious organization.

This us wonderful
My prayer is no persons can be discriminated for their religion religion no ifs and or buts
Wether it be: Jewish, Christian or Muslim etc
That peopple judge on their content if their character or behavior