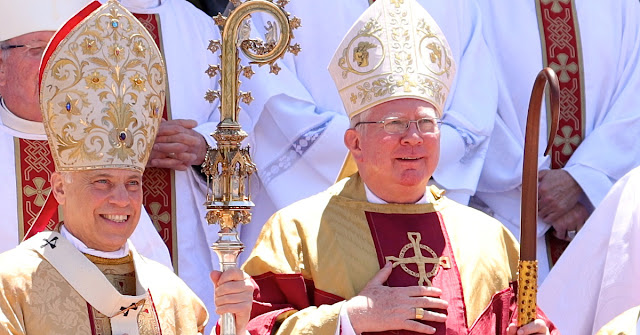 Auxiliary Bishop Robert Christian has died unexpectedly at his residence at St. Patrick Seminary & University in Menlo Park.  Bishop Christian was appointed rector of the Seminary on January 14 of this year.

I was deeply saddened to learn this morning of his passing.  The Archdiocese was greatly blessed to have his wisdom and leadership even if for so brief a time as auxiliary bishop and even briefer time as rector of the Seminary.  We join with the Dominican community in praying for the repose of his soul and for peace and comfort for his wonderful family in their time of mourning.

Robert Francis Christian was born in San Francisco in 1948 to Robert Francis and Gloria Jean Christian. He was raised in San Francisco, where he attended St. Brendan and St. Vincent de Paul grammar schools and St. Ignatius High School. In 1970, after graduating from Santa Clara University, he entered the Dominican Order in Oakland.

Fr. Robert was ordained in 1976, and in 1977 he began teaching at Dominican College of San Rafael. He went to Rome in 1979 for doctoral studies, and upon completion of his doctorate, ministered at the Newman Centers at the University of California in Riverside and the University of Washington in Seattle.

Fr. Robert was assigned to the faculty of the Pontifical University of St. Thomas Aquinas (the Angelicum) in Rome in 1985. Except for the years 1997-1999, when he was vicar provincial of the Western Dominican Province headquartered in Oakland, Fr. Robert taught theology, ministered to the Dominican community in Rome, held administrative offices at the Angelicum, and offered occasional assistance to various Vatican bureaus, until 2014.

Prior to becoming bishop he was the Student Master at St. Albert Priory in Oakland. At the time of his death he was a member of the Anglican-Roman Catholic International Commission and a consultor to the Pontifical Council for the Promotion of Christian Unity.

SCHEDULE OF SERVICES
All are welcome. Further information will be added as it is known.

BURIAL: Will take place at a later date
St. Dominic Cemetery, Benicia
Posted by Jesus Caritas Est at 11:50 AM