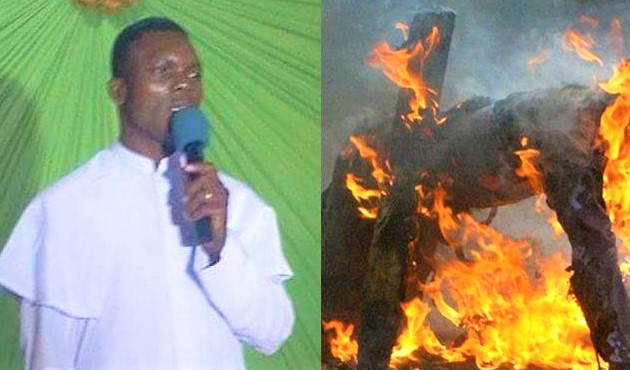 A group of unidentified bandits, attacked and killed Reverend Father David Tanko, a Catholic priest at Kufai Amadu in Takum, Taraba State, in Nigeria, Africa. He was on his way to Takum for a peace meeting with his fellow clergymen on how to resolve the lingering Tiv, Jukun crisis when he was killed. After killing him, the attackers set him and his car on fire.
In neighbouring Donga Local Government Area (LGA), a student of ECWA Seminary School, was in the early hours of Wednesday killed on his farm. recalls that the Catholic Parish Priest of St. James the Greater Parish, Ugbawka, in Enugu state, Rev Fr Paul Offu was reportedly killed by suspected Fulani herdsmen on Thursday evening.
The Bishop of Catholic Diocese of Jalingo, Bishop Charles Hammawa, on Thursday, condemned the killing of Rev. Fr. David Tanko of St. Peter’s Catholic Parish Amadu, Taraba by yet- to-be-identified bandits. DAILY POST had reported that a group of unidentified bandits, on Thursday attacked and killed Reverend Father David Tanko, a catholic priest at Kufai Amadu in Takum, Taraba State.
The Bishop said Fr Tanko was killed between Kasuan Haske and Tortsee on his way to Amadu from Takum in Takum Local Government Council of Taraba. He said “We received the news of his death with shock and great sadness, the diocese is mourning. “We have been preaching peace and making efforts to bring the parties that were enmeshed in crisis in the area together for a round table discussion. ”For a priest who has been preaching peace to be killed in this most gruesome manner is pathetic, to say the least, a priest belongs to all. “For now, we are not pointing accusing finger at any group for being responsible.’’
Hammawa said that the wake in honour of the priest will hold on Monday, Sept 2, 2019 while the burial would take place on Tuesday at the Diocesan Cemetery in Jalingo.
Edited from Nigeria's Daily Post
This is part of ongoing violence against Christians in Nigeria which has seen thousands killed over the years and several priests murdered...Please Pray for Peace.
Posted by Jesus Caritas Est at 8:25 AM