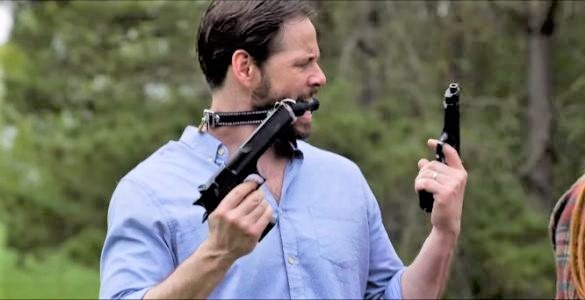 The studio released a statement on Saturday, saying:
“While Universal Pictures had already paused the marketing campaign for 'The Hunt,' after thoughtful consideration, the studio has decided to cancel our plans to release the film. We stand by our filmmakers and will continue to distribute films in partnership with bold and visionary creators, like those associated with this satirical social thriller, but we understand that now is not the right time to release this film,”
Deadline Hollywood reports.

Advertisements have been pulled from an upcoming satirical horror film in which elites hunt and kill "deplorables" amid intensifying political hostilities. The decision was made to pull the ads but not the movie after three mass shootings were committed this summer.

The plot of the NBC Universal movie "The Hunt," which is slated for release on Sept. 27, follows wealthy thrill-seekers who board a private jet and fly off to a secluded five-star resort where their mission is to hunt and kill so-called deplorable Americans.

According to The Hollywood Reporter, NBC's Universal is now reconsidering its ad strategy following the mass shootings at the Gilroy Garlic Festival in California, the Walmart shopping center in El Paso, Texas, and at a nightclub in Dayton, Ohio.

********************************
Dear Reader, Please Don't just Ignore this! Consider a small Donation to Catholic News World, a Mission, which brings the Gospel to over 200 Countries World Wide! Easy Just Click the LINK below!
If you do not support Pro-Life - Christian media who will?
Every little bit helps - as a Donor you and your Family will be added to our Church Prayers - You can add your prayer intention on the Donation site "Donor Wall":
https://donorbox.org/support-catholic-news-world-we-need-

"The violent, R-rated film from producer Jason Blum's Blumhouse [production company] follows a dozen MAGA types who wake up in a clearing and realize they are being stalked for sport by elite liberals,” The Hollywood Reporter noted.

Characters in the movie that are considered prey for the hunters are referred to as deplorables, a term former Secretary of State Hillary Clinton used to describe supporters of presidential candidate Donald Trump during the 2016 election.

"At least the hunt's coming up. Nothing better than going out to the manor and slaughtering a dozen deplorables," another character replies.

"The Hunt," which features Oscar winner Hillary Swank, was originally titled "Red State vs. Blue State." Among the deplorables in the film — who were pre-selected to be murdered — were those who voiced opposition to abortion.

"The script for 'The Hunt' features the red-state characters wearing trucker hats and cowboy shirts, with one bragging about owning seven guns because it's his constitutional right. The blue-state characters — some equally adept with firearms — explain that they picked their targets because they expressed anti-choice positions or used the N-word on Twitter," The Hollywood Reporter added.


In a segment on Fox News' "The Ingraham Angle," Catholic author and journalist Raymond Arroyo said the movie is disgusting and should be pulled, particularly in light of the ongoing tension surrounding gun violence.
Edited from ChristianPost
Posted by Jesus Caritas Est at 11:42 AM