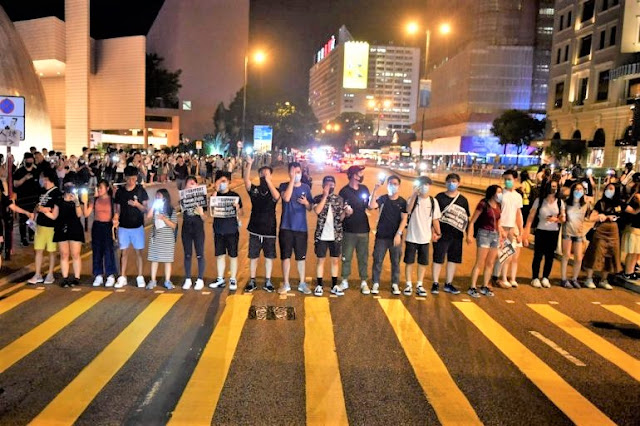 "Hong Kong Way": a 60km human chain for freedom (Photo and Video)
At least 210 thousand people of all ages and from all social strata participated. The suggestive view of the Lion Rock ridge illuminated by torches and laser beams. The "Hong Kong Way" recalls the "Baltic Way" of 30 years ago, organized by the Baltic countries to demand independence from the USSR.
Hong Kong (AsiaNews) - At least 210,000 people of the anti-extradition movement have formed a 60km human chain in different parts of the territory. Called "Hong Kong Way", it was formed by young people, children and adults of all social levels who from 7 pm on August 23rd gathered together forming long human chains from Kennedy Town to Causeway Bay (photo 1), from Kowloon Tong at Yau Ma Tei, along the coast of Tsim Sha Tsui, from Tsuen Wan to Lai King. Several thousand others have settled along the path that runs along the ridge of the Lion Rock, near Sha Tin, using torches, cell phones and laser beams to illuminate the night sky (photo 2).

Many chanted: "Liberate Hong Kong, revolution of our times!”, Which has become one of the slogans favored by the anti-extradition movement.

At 9 pm, responding to an invitation the went out on social media, all the participants covered their right eyes with their hands, shouting: "Black cops, give us back our eye". The reference was to the injuring of a woman by the police last June 11th. The woman risks losing an eye (photo 3)

The protagonists of the human chain demand that the government respond to the five demands of the movement: to withdraw definitively the law on extradition; not to characterize violent confrontations as "revolts"; lift charges against the demonstrators arrested during the clashes and free them unconditionally; a full and independent investigation into the actions of the police and the recent terror of Yuen Long; implement universal suffrage.

The "Hong Kong Way" is linked to the mass demonstration of the "Baltic Way" of 30 years ago, when about two million people from Estonia, Latvia and Lithuania formed a 680 km long human chain demanding independence from the Soviet Union in 1989.

But the demonstrators said: "Beijing has branded us as pro-independence, but most of us just want the government to defend Hong Kong's rights and freedoms". (P.W.)
FULL TEXT Release Asia News IT
Posted by Jesus Caritas Est at 9:47 AM