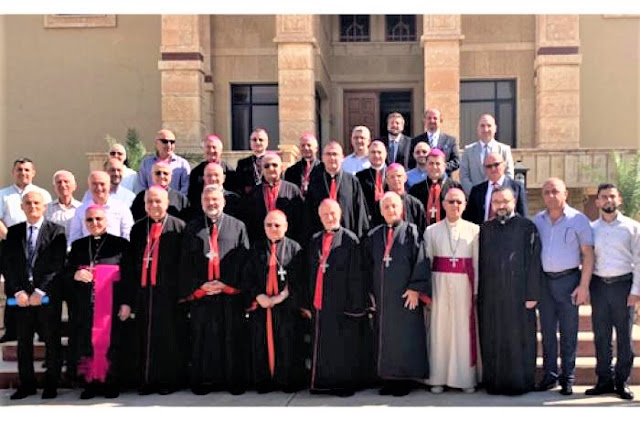 Ankawa (Agenzia Fides) - The periodical synodal assembly of the Bishops of the Chaldean Church began on Sunday 4 August with the Eucharistic celebration presided by the Patriarch Louis Raphael Sako.
Some sessions of the Chaldean synodal assembly, hosted at the patriarchal headquarters of Ankawa - suburb of Erbil, capital of the autonomous region of Iraqi Kurdistan and laypeople from the different dioceses of the Chaldean Church, the Middle East and the diaspora will participate in the work of the synod.
On the occasion of the opening of the works, Patriarch Louis Raphael made known the text of a letter he sent to Pope Francis. In the letter, the Primate of the Chaldean Church also mentions the "great joy" with which the announced desire of the Bishop of Rome to visit that country next year was received among the Christians of Iraq. "From the earliest centuries", reads the letter sent by Patriarch Sako to Pope Francis, released by the official media of the Chaldean Patriarchate - the Chaldean Church was a missionary Church, proclaimed the Gospel in China, and offered a large number of martyrs, which still continues to grow. We can say that it has always been the Church of the Martyrs". In the letter to the Pope, the Patriarch remarked that "even our Muslim brothers suffer for their life every day", and hope that in the shared pain, paths of hope for a better future can be opened".
In the first two days the Synodal Assembly will focus on the spiritual exercises preached by Joseph Soueif, Maronite Archbishop of Cyprus. Then, from Tuesday 6 to Thursday August, the synodal sessions in which a lay member is also expected for each Chaldean diocese will be held. The third and final part of the Synodal Assembly, starting from Thursday 8 August, will again be reserved for Bishops. (GV) Full Text Release by Agenzia Fides, 5/8/2019)
Posted by Jesus Caritas Est at 9:13 AM