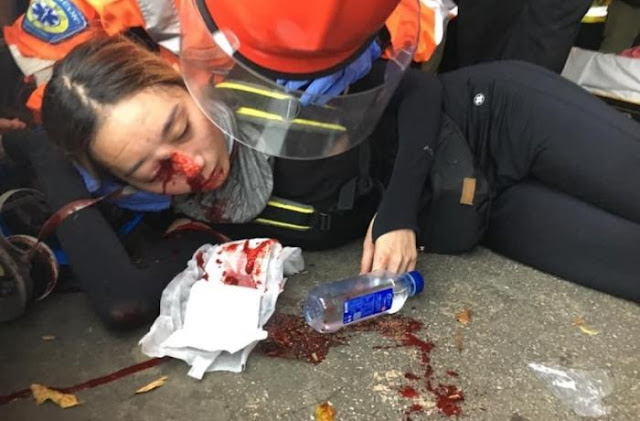 Hong Kong students on all-out strike. Woman shot in the eye by police
by Paul Wang
For the protesters the police are "completely out of control" and have "lost humanity".  The woman hit by a bullet risks losing an eye.  At the behest of Beijing, Cathay Pacific personnel participating in the demonstrations are excluded from flights in China and through China.  Tomorrow's sit-in for health care personnel in Shatin, at the Prince of Wales hospital.


Hong Kong (AsiaNews) - The student associations of 11 local universities are proposing an all-out strike.  They demand that justice be done, given that the police use increasingly excessive force and violence to counter the protests that have now entered the third month.

In a joint statement, the associations say that the police are "completely out of control" and "lost all humanity" in their treatment towards protesters in different areas of the city last night.  The police would have used excessive force not only towards protesters, but also towards civilians and journalists.

The demonstrations began last June 9 with the request to cancel the China extradition law, which would endanger the rule of law that exists in Hong Kong.  In an attempt to tame the increasingly oceanic demonstrations, the police used rubber bullets, sticks, tear gas and is suspected of being in league with the Chinese mafia in beatings against young demonstrators.

Yesterday, during a protest in Tsim Sha Tsui, a woman dressed in black clothes - the protesters de-facto "uniform" - was hit by a bullet and could lose an eye.  At least 40 people were injured and taken to the hospital.  Among them there is also a policeman, with burns caused by a Molotov cocktail.

The government of the territory, led by Carrie Lam, has "buried" the extradition law, but refuses to meet the demands of the demonstrators for the "definitive cancellation" of the law and the launching of an independent investigation into the violence of the  police.

The silence and the hard line of the government push many civil society groups to participate in the demonstrations.

After lawyers, entrepreneurs, civil servants, pilots, teachers, now the medical staff are taking to the streets.  Doctors and nurses will hold a sit-in tomorrow in Shatin, at the Prince of Wales hospital.

While the protesters are asking entrepreneurs to show sympathy for those who strike, the Chinese government is pressing for companies to punish them.

Three days ago, the Beijing authorities asked Cathay Pacific, the Hong Kong airline, to submit a list with the identities of their staff flying to China or crossing its airspace.  They demand that all employees involved in "illegal protests" be banned from those flights.  Cathay Pacific sent a message to its staff saying that the airline was forced to comply with these new rules set by the civil aviation administration in China.

On August 7, Beijing gathered 500 business personalities from the pro-government Hong Kong parliament in Shenzhen.  They asked them to work to support the Carrie Lam government and to "restore order" in Hong Kong.
FULL TEXT from AsiaNews IT
Posted by Jesus Caritas Est at 12:39 PM