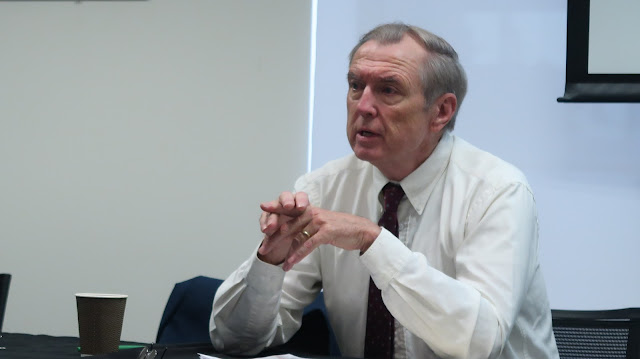 A thought-provoking seminar was held by ACU this week, featuring Professor of Law at Notre Dame University, Gerard V. Bradley as the keynote speaker.

The seminar began with a comprehensive talk containing ten theses on ‘what religious freedom is and what it is isn’t’ and raised a number of thought-provoking points about the relationship ‘truth’ has in one’s understanding of religious freedom as opposed to ‘conscience’ which is what religion can be referred to more widely in today’s world context.

‘Religious liberty is about religion as a distinct irreducible phenomenon, distinct and unique and something that’s a part of the human experience,’ he said. ‘Religion is a relationship with a greater-than-human source of meaning and value.’

In relation to today’s world, Professor Bradley spoke about religious freedom being ‘grounded in the truth about religion but not in religious truth.’

‘Religious liberty is not grounded in either being right or being wrong about what or who exactly is God. Religions include truths or proposition which may be true or could be false stipulations of authority.’

He theorized that ‘Contemporary conscience is often thought of in the ‘magical’ sense’ and that ‘anyone with a rational nature can enjoy the good on religion. It doesn’t depend upon the possession of a special skill. But everyone can be or choose not to be religious.’


‘That separation of Church and state and the religious liberty that the separation makes possible are really Christian inventions.’

In these discussions, they covered material like what is acceptable to express freely as a person with religion in their professional lives.


The forum concluded with an open discussion regarding political correctness in interfaith dialogue and its influence in wider topics like biology.