RIP Bishop John M. Sherlock - Emeritus of the Diocese of London, Ontario - Death of Bishop at the age of 93 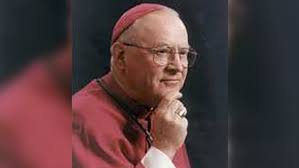 Bishop Sherlock was born on 20 January 1926 in Regina, Saskatchewan. He entered St. Augustine's Seminary in Toronto in 1946 to begin his theological studies and was ordained to the priesthood on 3 June 1950 for the Diocese of Hamilton by the Most Reverend R.H. Dignan, Bishop of Sault Ste. Marie. Following his ordination, he continued his studies and received a Licentiate in Canon Law from the Catholic University of America in 1952. He later received a Doctor of Laws (honoris causa) from the University of Windsor (1985), a Doctor of Divinity (honoris causa) from Huron College, London, Ontario (1986), and became a Fellow (honoris causa) of the University of St. Michael's College, Toronto (1994). Upon completion of his Licentiate in Canon Law, Bishop Sherlock returned to the Diocese of Hamilton to begin his pastoral ministry.
He served as Assistant Pastor and then Pastor in parishes within the diocese from 1952 until 1974. During this time, he also held the positions of Lecturer in Religious Studies and Newman Chaplain at McMaster University in Hamilton, Advocate and Judge for the Regional Matrimonial Tribunal, Trustee and Chairman for the Hamilton-Wentworth Separate School Board, Consultor for the Diocese of Hamilton, and Board member and Vice-Chairman for St. Joseph's Hospital (Hamilton). On 25 June 1974, he was appointed Auxiliary Bishop of the Diocese of London and was ordained Bishop on 28 August 1974 by Bishop P.F. Reding. On 8 July 1978, he was appointed Bishop of the Diocese of London and installed on 21 August.
As a member of the Canadian Conference of Catholic Bishops (CCCB), Bishop Sherlock was a member of the then Commission for Christian Education (English Sector), the then Pastoral Team for Study and Action, the then Administrative Board (now the Permanent Council), the then Commission for Social Affairs, the then Operations Review Committee, the then Ad hoc Committee on Constitution, as well as the then Commission for Social Communications (English Sector). From 1983 to 1985, Bishop Sherlock served as the President of the CCCB during which time he led the Conference in its organization of the Papal Visit to Canada by Pope Saint John Paul II in 1984. Bishop Sherlock went on to represent the CCCB with the Canadian Council of Churches (1989-1991) and served as the Council's Vice-President in 1990-1991. Founded by the CCCB, Bishop Sherlock was the first Chairman of the National Catholic Broadcasting Foundation (later renamed the National Catholic Broadcasting Council), which, in 1998, led to the Daily TV Mass broadcast, originally on Vision TV, as a way of helping the Church to be more present and visible in the media. He retired as Bishop of London in 2002.