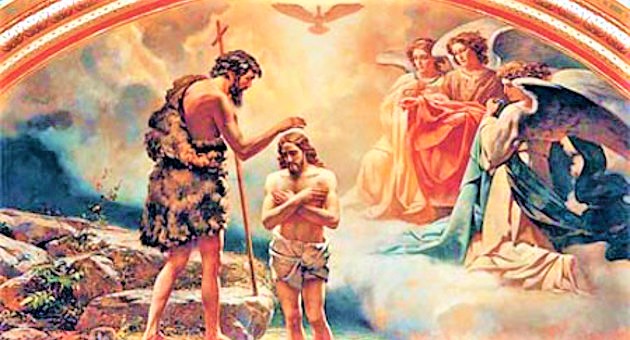 Memorial of the Passion of Saint John the Baptist
Lectionary: 428/634

We have been reassured about you, brothers and sisters,
in our every distress and affliction, through your faith.
For we now live, if you stand firm in the Lord.

What thanksgiving, then, can we render to God for you,
for all the joy we feel on your account before our God?
Night and day we pray beyond measure to see you in person
and to remedy the deficiencies of your faith.
Now may God himself, our Father, and our Lord Jesus
direct our way to you, and may the Lord make you increase
and abound in love for one another and for all,
just as we have for you,
so as to strengthen your hearts,
to be blameless in holiness before our God and Father
at the coming of our Lord Jesus with all his holy ones. Amen.

Herod was the one who had John the Baptist arrested and bound in prison
on account of Herodias,
the wife of his brother Philip, whom he had married.
John had said to Herod,
"It is not lawful for you to have your brother's wife."
Herodias harbored a grudge against him
and wanted to kill him but was unable to do so.
Herod feared John, knowing him to be a righteous and holy man,
and kept him in custody.
When he heard him speak he was very much perplexed,
yet he liked to listen to him.
She had an opportunity one day when Herod, on his birthday,
gave a banquet for his courtiers,
his military officers, and the leading men of Galilee.
Herodias' own daughter came in
and performed a dance that delighted Herod and his guests.
The king said to the girl,
"Ask of me whatever you wish and I will grant it to you."
He even swore many things to her,
"I will grant you whatever you ask of me,
even to half of my kingdom."
She went out and said to her mother,
"What shall I ask for?"
She replied, "The head of John the Baptist."
The girl hurried back to the king's presence and made her request,
"I want you to give me at once
on a platter the head of John the Baptist."
The king was deeply distressed,
but because of his oaths and the guests
he did not wish to break his word to her.
So he promptly dispatched an executioner with orders
to bring back his head.
He went off and beheaded him in the prison.
He brought in the head on a platter and gave it to the girl.
The girl in turn gave it to her mother.
When his disciples heard about it,
they came and took his body and laid it in a tomb.
Posted by Jesus Caritas Est at 9:57 AM