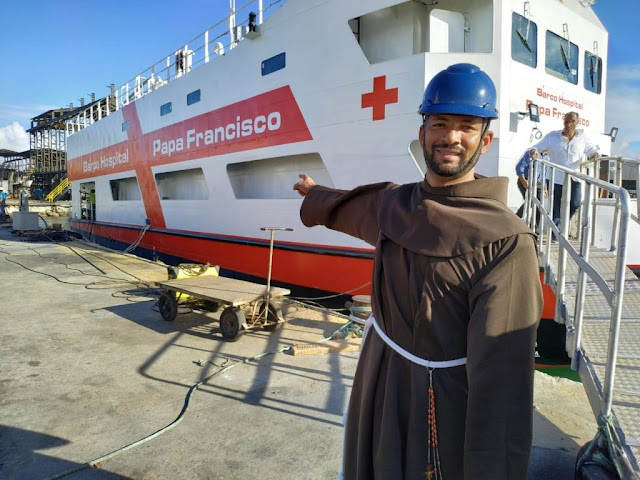 Pope Francis sends a letter of congratulation for a new hospital boat, which arrived on Saturday in the Archdiocese of Belém do Pará in Brazil.
By Vatican News

The “Pope Francis Hospital Ship” has arrived in the Archdiocese of Belem, and is set to begin work in areas of the Amazon region which are accessible only by river.

At a ceremony for the launch of the vessel, a letter from Pope Francis was read, in which the Pontiff expresses the “great satisfaction” with which he joins those taking part “in this moment of joyful thanksgiving to God.” He notes that the hospital ship “will bring the Word of God and offer access to better health care to the most needy people” along a stretch of the Amazon extending around one thousand kilometers.

A response to the Lord's mandate
“In addition to being a beautiful concrete gesture in view of the Synod of Bishops for Amazonia,” the Pope says, “this river hospital is above all a response to the Lord's mandate, who continues to send His disciples to proclaim the Kingdom of God and to heal the sick.” In fact, the Holy Father says, the “primordial mission” of the new hospital ship will be to promote the “abundant life” that Jesus offers to all men and women.

In his letter, Pope Francis recalls once again the image of the Church as a “field hospital” which “welcomes everyone without distinction or conditions,” noting that with this new initiative, the Church can also be seen as a “hospital on the water.”

Sign of faith and solidarity
“Just as Jesus, in appearing walking on the waters, calmed the storm and strengthened the faith of the disciples,” he says, “this boat will bring both spiritual comfort and calm to the upheavals of needy men and women, abandoned to their fate.”

The Holy Father concludes his letter with a word of thanks to Bishop Bernardo Bahlmann of Óbidos (Brazil), the main proponent of the initiative, along with the Franciscans of Providence, for “this beautiful sign of faith and Christian solidarity.”
FULL TEXT Source: VaticanNews.va - Image Source: Google Images
Posted by Jesus Caritas Est at 10:34 AM