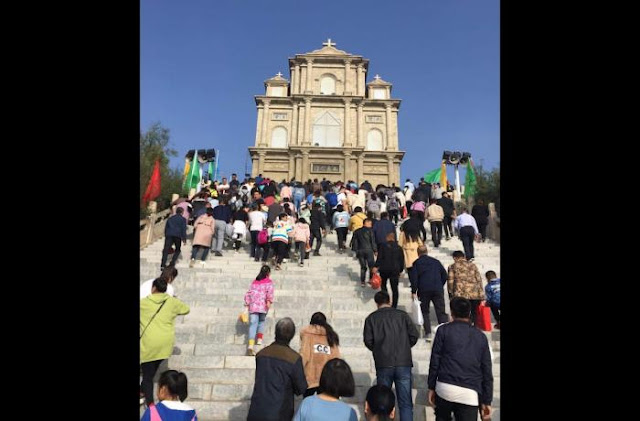 Asia News reports that Taiyuan, pilgrims flock to save Shrine of Our Lady from destruction
by Wang Zhicheng
The government wants to destroy the mountain top "Heaven’s Gate". Perhaps a motorway will pass through the area. Great security measures to control thousands of faithful. The sanctuary was built in 1924. Every year, on September 15th, tens of thousands of pilgrims come from all over China.

Taiyuan (AsiaNews) - Thousands of faithful came on pilgrimage to Dongergou, near Taiyuan (Shanxi), to the shrine of Our Lady of the Seven Sorrows, on the feast of Our Lady of Sorrows, which is celebrated on September 15 in the Church.

This year, in addition to reasons of faith, the faithful were further concerned by news that the local government wants to destroy the solemn door of the sanctuary, called " Heaven’s Gate" because it says that it is too high.

Other reports claim the local government's plan is to build a highway through the area. The statues that adorn the Gate have already been removed, in the name of "sinicization". Some time ago the news spread that the government wanted to destroy the entire sanctuary. In the name of "sinicization" many churches have already been defaced, crosses torn from bell towers, domes destroyed. Another shrine in Guizhou risks destruction.

Yesterday the pilgrimage took place amid large security measures, in the presence of the police, but everything happened in a quiet way. No priest, except those from the Diocese of Taiyuan, was allowed to concelebrate or preside over a mass. Many faithful climbed to their knees on the steps to Heaven’s Gate (photo 3).

The shrine of Our Lady of the Seven Sorrows was built almost a century ago, in 1924. " Heaven’s Gate" overlooks a long zigzag path on the mountain interspersed with the Stations of the Cross (photo 2). From "Heaven’s Gate " pilgrims contemplate the sanctuary that partly recalls the structure of the Temple of Paradise in Beijing (photo 4). Every year, on September 15, tens of thousands of pilgrims come from all over China.

One of the faithful explained that the dedication to Our Lady of the Seven Sorrows took place because they wanted to build a shrine to the Virgin Mary and because the mountains around the church are called "of the seven bitternesses". The church and sanctuary were built to ask God for protection from floods and drought.
Full Text Source: Asia NewsIT