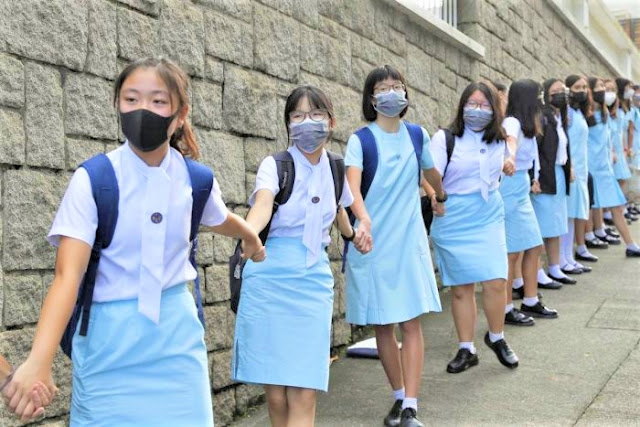 Hong Kong (AsiaNews) - Students from dozens of secondary schools in different areas of Hong Kong have formed human chains this morning between the various branches to support the five questions that the anti-extradition movement has put to the government (see photo 1 and video ).

Boys and girls from Catholic and Protestant schools participated in the event (photo 2). Many of them arrived in class five minutes later, again to draw attention to the five demands. The head of the executive responded only to the first one, permanently canceling the extradition law, but not to the other four.

Among these, the most urgent is the opening of an independent investigation into the excessive use of force by the police.

In addition, they are accused of collusion with local mafia groups that threaten and intimidate young people participating in demonstrations with acts of hooliganism. Parents and friends of those affected open disputes against police officers.

The general distrust of the police in also mounting because in these three months of demonstrations many cases have been discovered of policemen in uniform without a recognition code; others who speak in Mandarin (the language of popular China, and not the Cantonese used in Hong Kong); others who refuse to present their identity card; still others that have a China police badge. Protesters suspect that policemen in China are now infiltrated among the Hong Kong law enforcement agencies.

Yesterday, during a demonstration in Chater Garden, in the center, which was attended by tens of thousands of people, slogans such as "sold out" or "Mafiosi" were brandished against policemen.

Towards the end of the demonstration, in the afternoon, a hundred protesters went to the US consulate. Waving stars and stripes flags banners praising democracy, they asked the United States for help in ensuring respect for human rights for the people of Hong Kong.

Late in the evening there were clashes between police and extremist protesters in different parts of the city. Some metro stations were closed.

This morning, one of the leaders of the student riots, Joshua Wong, was released on bail again. He had been arrested yesterday when he returned from a trip to Taiwan and was to leave for Germany and then for the USA.

Wong was arrested at the end of August for leading an unauthorized demonstration and released on bail. Although he was subjected to a curfew and could not leave Hong Kong, the court had allowed him to make trips already planned before his arrest.
(Video credit: Guardians of Hong Kong).
Full Text Source: AsiaNews IT - Image Source: Google Images