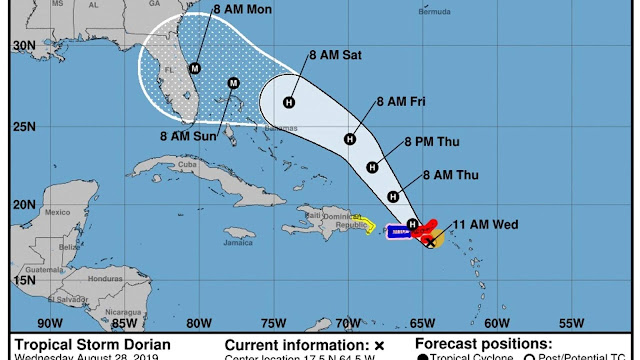 The Bahamas prime minister raised the death toll from Hurricane Dorian on Tuesday  to seven and said more deaths were expected  "We are in the midst of one of the greatest national crises in our country's history," he said. "No effort or resources will be held back." Dorian, was later downgraded to a Category 2 storm, was the most powerful ever to hit the Bahamas, with floodwaters destroying thousands of homes, trapping people and making resue efforts all the more difficult. Around 45 percent of homes in Abaco and Grand Bahama were believed to be damaged or destroyed when the areas were pounded by 185 mph winds.
The Grand Bahama Airport was under six feet of water as of Tuesday. Images revealed the scope of damage as buildings were flooded and at least one community was destroyed. People in Grand Bahama were evacuated by rescue crews in the midst of heavy rain and wind. The U.S. Coast Guard rescued at least 21 people injured at Abaco. "We will confirm what the real situation is on the ground," Health Minister Duane Sands said. "We are hoping and praying that the loss of life is limited." Officials urged over two million people in Florida, Georgia and North and South Carolina to evacuate. Dorian is expected to pass close to Georgia and South Carolina on Thursday or Friday.
Edited from Fox News - Image Source Google Images
Vatican News reports that Pope Francis acknowledged the devastation wrecked so far by Hurricane Dorian in his greetings to journalists aboard the papal plane bound for Maputo, Mozambique, and asked everyone to pray for those affected. “Those poor people,” he said, “who from one day to the next have lost their homes, everything, even their lives.”
Posted by Jesus Caritas Est at 8:33 AM