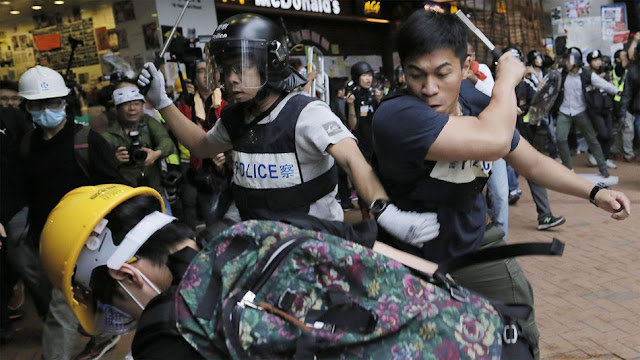 Hong Kong police violence on protesters (video)
by Paul Wang
A crowd of young people and parents at the Prince Edward subway station ask MTR to release footage of the evening of August 31, when police indiscriminately hit out at demonstrators and passengers, even children.  MTR refuses and decides to keep the video for three years.  Another video shows three policemen beating a defenseless and bleeding young man.  But the police say they don't see any violence.

Hong Kong (AsiaNews) - Bullets at point blank range,  batons used on defenseless people, pepper spray on unsuspecting passengers, accusations of torture during arrests and even rumors of killings of people during demonstrations.

Hong Kong's social networks are full of videos and photographs that point the finger at the local police, once famed for their fair play.  With the rise of anti-extradition demonstrations, the police have raised the level of violence, partly justified by the clashes with the most radical fringes of the movement, partly to exercise fear especially on young people, who form the majority of protesters.

For this reason, one of the essential demands expressed by the movement is that there be an independent inquiry into the excessive use of force exerted by the police.  The request was first formulated last June even by Christian leaders and remains an unmovable point even after Chief executive Carrie Lam's refusal.Two days ago she definitively canceled the extradition law, but did not  accept the other demands put forward by the population, despite saying she was open to dialogue

On August 31, dozens of policemen in riot gear descended on the Prince Edward subway platform and started beating young people with sticks and threatening them with weapons;  they entered the carriages and indiscriminately beat the people inside, including children, to the point they were bleeding and sprayed pepper spray (see video 1).

The government defends itself by saying that the demonstrators were vandalizing the station, attacking passengers and employees and that the police came in to "stop all violent acts and arrest the guilty".  Late in the evening the metro company (MTR Corporation) closed the station for two days.

But today, a crowd of young people and parents gathered at Prince Edward station (photo 2) asking the MTR to release the videos of the evening in question.  Many young people knelt in front of the manager's office, but the authorities refused to make the videos public and said they wanted to keep them undisclosed for three years.  Videos can usually be released after 28 days.

The other episode happened on 11 August (photo 1): around 10 pm, there were some clashes between demonstrators and other men who were later identified as policemen disguised as protesters, in what is called a "decoy operation" to arrest the most active young people.  Three policemen - two dressed as demonstrators, another in riot gear - blocked a young man on the ground.  Standing with his knees on his body, one of them hit him in the head with his club.  On the video (see video 2) we see a small puddle of blood, with the young man apologizing for being released and the police chasing away reporters and bystanders.  Later it became known that the young man is called Chow Ka-lok.  He was arrested and only after three hours he was taken to the North District Hospital, where he was treated for injuries to his right eyebrow and nose.  He was later accused of assaulting a policeman, but was released on bail.

Two days ago, Steve Li, police superintendent for the Crime and Mafia Office, chased by journalists on this case, said that "the truncheon did not hit the boy's head" and that when you watch the video "everyone sees things  differently".