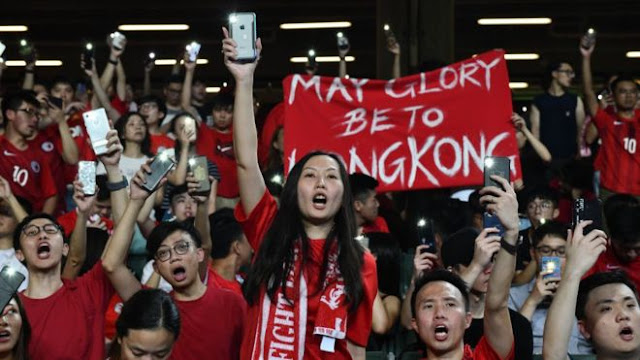 Hong Kong, the peaceful (illegal) march and night clashes (Photo and Video)
by Bernardo Cervellera
The police had denied permission, but tens of thousands of people of all ages poured into the center to "walk". Police officers accused of being "mafiosi" and implementing the law in a "selectively". Stones, bricks and Molotov cocktails thrown against the government headquarters. Heavy damage to metro stations. Groups of "Fujian mobsters" clash with protesters and journalists at North Point. Card Zen asks for prayers for Hong Kong.

Hong Kong (AsiaNews) - A march in central Hong Kong, illegal but peaceful, has given rise to clashes between protesters and police setting fire to the center of the island at Admiralty, Wan Chai and Causeway Bay. Late in the evening and at night there were other clashes between pro-China groups, linked to the Mafia, and anti-China protesters on the outskirts of the island, at North Point and Fortress Hill, leaving at least eight wounded.

Originally yesterday's march was to be organized by the Civic Front for Human Rights, which brings together many democracy groups and has already organized peaceful marches in the past gathering millions of people. However, the police denied permission, citing security reasons. But the anti-extradition movement issued indications to still gather, claiming the right to assembly, and advising supporters to go to Causeway Bay for "shopping" and then take a "walk" to Central, in Chater Garden, the area around the old parliament building.

From 2.30pm on a sultry day, tens of thousands of people poured into Causeway Bay. The crowds included parents with small children, elderly, and especially young people. Many of these wore the "uniform" of the movement, with black shirts and masks on their faces. In a clear criticism against China that wants to destroy the liberal society of Hong Kong, denying democracy, many waved American, British, Australian, the flag of Hong Kong when it was still an English colony. The strongest criticism was born on placards depicting the flag of the People’s Republic of China, with the stars forming a swastika and with the inscription "Chinazi" .

People with megaphones shouted slogans repeated by the crowd ("Liberate Hong Kong: a revolution of our time"), chanting the song "Glory to Hong Kong", which has become a kind of movement anthem.

In Wan Chai, when the long procession passed next to the police headquarters, the slogans became one, continuously punctuated: "Gangsters, gangsters, gangsters!" The reference is to the collusion - proven by a video - of support that the police gave to Mafia groups in Yuan Long, who attacked demonstrators and underground passengers, without the police intervening. Moreover, in all of the clashes taking place here and there between pro-China groups and pro-democracy demonstrators, the police promptly arrest the protesters dressed in black, but leave the others free. For this reason they are accused of "applying the law selectively".

In Admiralty, passing in front of the official headquarters of the Hong Kong government, people raised their arms with an open hand to indicate the "five", ie the five demands for which the movement demands a response from the government: to eliminate the law on the extradition; not to characterize violent confrontations as "revolts"; remove the accusations against the demonstrators arrested during the clashes and free them unconditionally; a full and independent investigation into the actions of the police and their collusion with mafia groups; implement universal suffrage.

Carrie Lam, the chief executive, after three months of demonstrations, agreed to permanently withdraw the law, but ruled out an independent inquiry into police actions and postponed talks on the democracy. The government had already promised these talks three years ago, during the Occupy Central sit-ins, which, however, were not followed by any concrete gesture, indeed sit-in leaders were arrested and some pro-democracy youths were excluded from the parliamentary elections . For this reason, as a young student, who wants to remain anonymous, tells AsiaNews "we will continue our battles, perhaps only on weekends, but we will never give up".

The government's wall of silence before the "Five demands, not one less" - as one of the slogans of young people shouts - and the increasingly heavy-handed violence of the police, which some say is driven directly by Beijing, in the eyes of young people justifies the urban guerrilla warfare which also broke out last night.

Almost over, a hundred young men in black suits with masks on their faces started throwing stones, bricks and Molotov cocktails against the seat of government. The police responded with tear gas and rubber bullets fired at eye level.

At the launch of other Molotov cocktails, the police responded with hydrants and stinging and colored water. A Molotov hit a vehicle that went on fire. The crowd of radical protesters then destroyed the entrance to the Admiralty subway station (MTR) and caused damage to the Causeway Bay and Man Chai stations.

The MTR is accused of working for the police, allowing it to break into stations and beat and arrest young protesters and passengers. In addition, the company refuses to make public the surveillance videos on what happened at the Prince Edward station last August 31, when dozens of policemen used tear gas, pepper sprays and beat passengers and young demonstrators, holding siege in the station for hours .

Late in the evening, the most serious incidents occurred at Fortress Hill and North Point. Groups of middle-aged people, dressed in white and yellow, waved stools, sticks, butcher knives and bottles of flammable liquid at passers-by, even striking some journalists.

Others, describing themselves as members of the "Fujian Mafia" clashed with young men dressed in black and journalists filming the scene. Several people were injured. Some media point out that the police defended the "Fujian Mafia ", protecting them from the crowd and taking them away.

Yesterday, while the clashes took place in Admiralty and Wan Chai, Card. Joseph Zen, bishop emeritus of Hong Kong, held a prayer meeting in the church of the Our Lady of Mount Carmel, asking all participants to pray for Hong Kong .
FULL TEXT Source: Asia News IT
Posted by Jesus Caritas Est at 10:09 AM