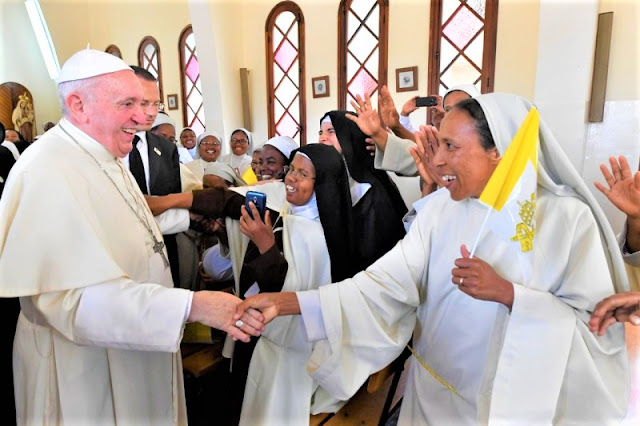 Pope to nuns in Madagascar: Little acts of love save the world
Pope Francis departs from his prepared text and speaks from the heart during his visit on Saturday with a group of contemplative sisters in Madagascar at the Monastery of Discalced Carmelites in Antananarivo.
By Sr Bernadette Mary Reis, fsp

Pope Francis visited the Discalced Carmelite Monastery dedicated to St Joseph in Antananarivo on Saturday morning. After praying Midday Prayer with a group of 100 sisters from all over Madagascar, Pope Francis decided to leave his prepared text with them in order to speak to them from his heart.

Exquisite love
Pope Francis began by recounting a story from the life of St Therese the Little Flower that many religious and contemplatives can relate to. While St Therese helps an elderly sister to get from one place in the convent to the other, helps to feed her, etc., the older sister repays her with continual complaints. The Pope repeated several times that, notwithstanding how St Therese was being treated by the older sister, “she kept smiling”.

“This is a story that reflects a small part of what happens in community life”, the Pope said. St Therese is a model because “with the strength of obedience she carried out this task with exquisite love” to the point that St Therese was able to say to Jesus that all the parties in the world could never make her happier than even one act of love for this older sister.

Love and prayer
Pope Francis then focused on another aspect of contemplative life: the daily struggle against temptation. His recommendation to the sisters is to make known to another sister, or to a superior, what is going on inside. “This is the help; this is the defense that you have in community: one helps another in order to form a united front”, he said. Convent walls or grills are helpless in keeping spiritual worldliness from entering in. “Love and prayer” are enough, Pope Francis said. St. Therese herself, the Pope reminded the sisters, was tempted even on her deathbed to the point that she thought she had lost her faith. Her experience shows us that there is no end to the daily struggle to love, to the fight against temptation, and the pursuit of holiness.

Speaking from experience
In conclusion, Pope Francis revealed that St Therese herself “accompanies an old man”, referring to himself. “She has taught me a lot of things”. Then, the Pope admitted, “at times I am a bit neurotic and I send her away”, like her older sister did. The Pope then ended, saying:

“At times I listen to her, at times…I do not listen to her well enough. But she is a faithful friend. Because of this…I wanted to share my experience of a Saint and to tell you what a saint is capable of doing and the way to become a saint.”
FULL TEXT Source: VaticanNews.va - Image Source: Vatican.va

Posted by Jesus Caritas Est at 9:10 AM