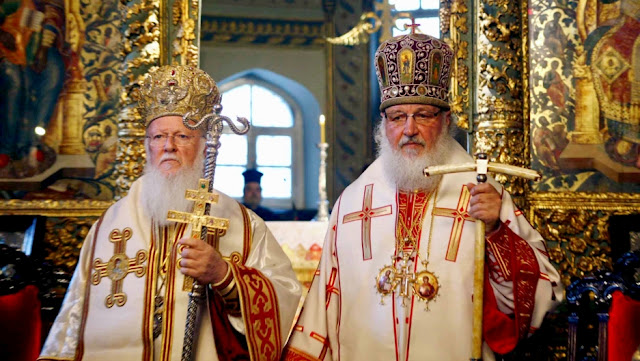 European Russian Orthodox reject Moscow patriarchate
by Vladimir Rozanskij
In Paris, out of 186 delegates from 10 nations, 104 voted in favor and 75 against. But two thirds of the voters were needed. A victory for the "ecumenical" role of Constantinople. The Russian archdiocese of Europe is composed of 65 parishes, with 11 large open churches, two monasteries and seven hermitages, a clergy of over 100 priests and 30 deacons.


Moscow (AsiaNews) - The general assembly of European Russian Orthodox has rejected the proposal of Archbishop Johann (Jean Renneteau) to move to the jurisdiction of the Moscow Patriarchate. Out of 186 delegates present, from 10 European countries, 104 voted in favor (58%) and 75 against, while two thirds of voters were required for this decision; the proposal was therefore rejected by only 4 votes.

The assembly met yesterday 9 September in a Catholic monastery near the Orthodox cathedral of St. Aleksandr Nevskij in Rue Darue in Paris (see photo). This is the historical site of the exarchate of the Russian emigrants after the revolution, subsequently transformed into an Archdiocese of Western Europe.

The assembly was presided over by Archbishop Johann, now dismissed from the Church-mother of Constantinople and deprived of the titular seat of "Chariopoulis". Johann did not have the right to vote. The main report was given by protopriest Johann Heyt, a member of the commission for negotiations with the other Orthodox Churches. According to Heyt, the assembly would have approved the passage under the omoforion (patriarchal stole) of Moscow.

One of the most authoritative priests, Father Aleksij Struve, underlined the serious canonical violations that occurred over the recent past, in which the very liberal status of the Orthodox world was ignored. He himself revealed that a French judge was present in the room, to record any further violations, one of which was the obligation to vote for the passage to Moscow, avoiding the alternatives that had also been presented. A favorable decision could have been challenged in court. Other members of the assembly also supported the complaint of Fr. Struve.

Against the background of the discussions remains the clash between Moscow and Constantinople. Since the Paris vote, Constantinople has achieved a significant result: a strong group has emerged that despite the "russicità" of the archdiocese, is not willing to submit to the Muscovite opponent. This increases the isolation of the Moscow patriarchate in the Orthodox world, highlighting instead the "ecumenical" role of Constantinople.

A somewhat partial declaration on the event has come from Moscow. For patriarchal spokesmen, "although the numerical majority has voted in favor of moving to Moscow jurisdiction, the statute of the European archdiocese prevents this decision; the results of the decision presuppose the continuation of the consultations”. For Moscow it is still possible to convince the recalcitrants and finally obtain the absorption of this important fragment of Russian orthodoxy into the original body of the Moscow patriarchate.

The Russian archdiocese of Europe is composed of 65 parishes, with 11 large open churches, two monasteries and seven hermitages, a clergy of over 100 priests and 30 deacons.
FULL TEXT from Asia News IT