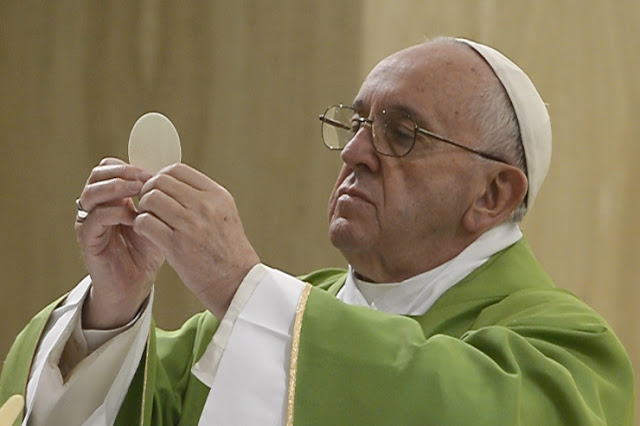 Open your heart to compassion and not close in indifference. This is the strong invitation that Pope Francis makes this morning in the homily of the Mass at Casa Santa Marta. Compassion, in fact, brings us to the path of "true justice", thus saving us from being closed in on ourselves. All reflection starts from the Gospel passage by Luke of today's Liturgy (Lk 7: 11-17) in which the story is told Jesus' meeting with the widow of Nain who mourns the death of his only son, as he is taken to the grave (listen to the service with the Pope's voice)

Our God is a God of compassion
The evangelist does not say that Jesus had compassion but that "the Lord was taken by great compassion", notes the Pope, and it is as if he said "he was a victim of compassion". There was the crowd that followed him, there were the people who accompanied that woman but Jesus sees his reality: she remained alone, she is a widow, she lost her only son. It is precisely compassion, in fact, that makes reality profoundly understood:

Compassion makes you see realities as they are; compassion is like the lens of the heart: it makes us really understand the dimensions. And in the Gospels, Jesus is often taken by compassion. Compassion is also the language of God. It does not begin, in the Bible, to appear with Jesus: it was God who told Moses "I saw the pain of my people" (Ex 3: 7); it is the compassion of God, who sends Moses to save the people. Our God is a God of compassion, and compassion is - we can say - the weakness of God, but also his strength. What best gives us: because it was compassion that moved him to send the Son to us. It is a language of God, compassion.

Compassion "is not a feeling of pain", which is proved, for example, when you see a dog die on the road: "poor thing, we feel a little pain," notes Francesco. But it's "getting involved in the problem of others, it's playing life there". The Lord, in fact, plays life and goes there.

The photo called "Indifference"
Another example Pope Francis draws from the Gospel of the multiplication of the loaves when Jesus tells the disciples to feed the crowd that followed him while they would like to dismiss her. "The disciples were prudent," notes Francis. "I believe - he continues - that at that moment Jesus became angry, in his heart", considering the answer: "Give them food to you!" His invitation is to take charge of the people, without thinking that after such a day they could go to the villages to buy bread. "The Lord, says the Gospel, had compassion because he saw those people as sheep without a shepherd", recalls the Pope. On the one hand, therefore, the gesture of Jesus, compassion, on the other hand the selfish attitude of the disciples who "seek a solution but without compromise", who do not get their hands dirty, as if to say that these people manage:

And here, if compassion is the language of God, so often human language is indifference. Take charge up to here and don't think any further. Indifference. One of our photographers, L'Osservatore Romano, took a photo that is now in the Almosineria, which is called "Indifference". I have talked about other times about this. One winter night, in front of a luxury restaurant, a lady who lives on the street extends her hand to another lady who comes out of the restaurant, well covered, and this other lady looks from another side. This is indifference. Go and look at that photograph: this is indifference. Our indifference. How many times we look from another side ... And so we close the door to compassion. We can do an examination of conscience: do I usually look from another part? Or do I let the Holy Spirit take me on the path of compassion? Which is a virtue of God ...

Returning saves us from indifference
The Pope then said he was touched by a word from today's Gospel when Jesus tells this mother: "Don't cry." "A caress of compassion," he emphasizes. Jesus touches the coffin, telling the boy to get up. Then, the young man sits up and starts talking. And the Pope remarks precisely the words: "And He gave him back to his mother"

He gave it back: an act of justice. This word is used in justice: to return. Compassion takes us to the path of true justice. We must always give back to those who have a certain right, and this always saves us from selfishness, from indifference, from the closure of ourselves. We continue today's Eucharist with this word: "The Lord was filled with great compassion". May he also have compassion for each of us: we need it.