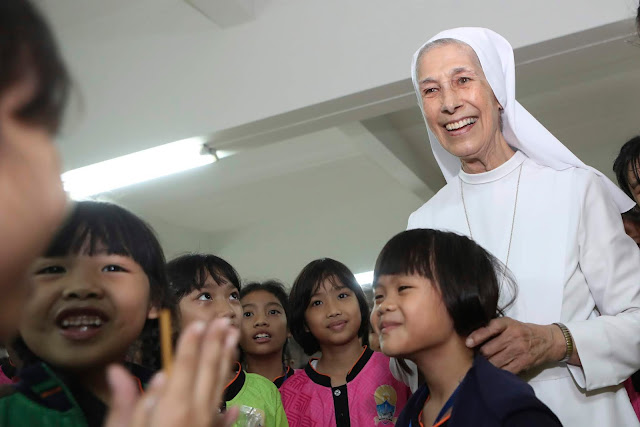 Pope Francis is due to arrive in Thailand on November 20 for a four-day visit, the first leg of an Asia trip that will also take him to Japan, Catholic officials announced Friday.

The pontiff's arrival will lead to a reinvigoration of belief among the nearly 400,000 faithful here. But for Sister Ana Rosa Sivori, it also means the pleasure of a family reunion.

At St. Mary's girls' school in Udon Thani, about 570 kilometres (355 miles) northeast of Bangkok, the pupils have only recently realised their unassuming vice principal's connection to the pope.


Originally from Buenos Aires in Argentina, Sister Ana Rosa came to Thailand in 1966 and has worked as a missionary in several parts of the country. She shares a great-grandfather with Jorge Mario Bergoglio, who, six years ago, became Pope Francis. She and the pontiff are second cousins.

As word of a planned papal visit spread ahead of the official announcement, Sister Ana Rosa went from being an almost invisible presence to being at the centre of increasingly excited attention in her community.

"Then, of course, for the Catholics, it would be a push to be a good Catholics, to be good Christians."

Two years ago, Pope Francis paid a historic visit to Myanmar. It came at the height of the Rohingya Muslim crisis. Myanmar's army carried out human rights abuses against the ethnic minority, and the call to hold officials responsible led to intense scrutiny of whom the pope met and what he said.

Hundreds of thousands flocked to see the pope on that visit, including many who traveled from neighbouring Thailand — but not Sister Ana Rosa. She said she didn't want to take up his time.

She insists, however, that the two are close, and stay in touch. He is "old school," she says, never sending emails and instead writing letters by hand and dispatching them through the Vatican's embassy in Bangkok.

The last time the cousins met face to face was two years ago at the Vatican.

In 1984, John Paul II became the first pope to visit Thailand when he spent two days in country, partly to thank the kingdom for sheltering refugees who fled wars in neighbouring countries. He visited a refugee camp to spread a message of hope.

The Catholic mission to Thailand began 350 years ago, but the country remains overwhelmingly Buddhist, with Catholics accounting for less than 1% of the population.