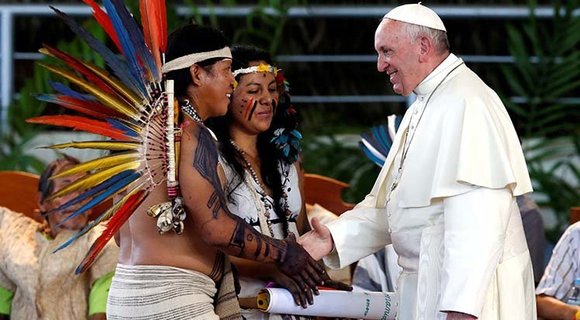 #SinodoAmazonico – Press Conference to present the Special Assembly of the Synod of Bishops for the Pan-Amazon Amazonia Region: new paths for the Church and for integral ecology, 03.10.2019

At 11.30 this morning, in the Holy See Press Office, a press conference was held to present the Special Assembly of the Synod of Bishops for the Pan-Amazon Region, taking place in the Vatican’s New Synod Hall from 6 to 27 October 2019, on the theme: Amazonia: new paths for the Church and for integral ecology.
The speakers in the conference were: His Eminence Cardinal Lorenzo Baldisseri, general secretary of the Synod of Bishops; His Eminence Cardinal Cláudio Hummes, O.F.M., archbishop emeritus of São Paulo, president of the Pan-Amazonian Ecclesial Network (REPAM), general rapporteur; and Bishop Fabio Fabene, under-secretary of the Synod of Bishops.
The following are their respective interventions:

Intervention by His Eminence Cardinal Cláudio Hummes, O.F.M.
The Special Synod of Bishops for Amazonia, which will begin on 6 October here in the Vatican, convened by Pope Francis, has as its theme “Amazonia: new paths for the Church and for integral ecology”. The broad context of the Synod is the serious and urgent socio-environmental crisis to which Laudato si’ refers: a) the climate crisis, that is, global warming due to the greenhouse effect; b) the ecological crisis as a consequence of the degradation, contamination, depredation and devastation of the planet, especially in Amazonia; c) and the growing social crisis of blatant poverty and misery that affects most human beings and, in Amazonia, especially the indigenous, the riverine, small farmers and those who live on the outskirts of Amazonian cities and others. But Laudato si' warns: “Today, however, we have to realize that a true ecological approach always becomes a social approach; it must integrate questions of justice in debates on the environment, so as to hear both the cry of the earth and the cry of the poor” (49). “We are faced not with two separate crises, one environmental and the other social, but rather with one complex crisis which is both social and environmental. Strategies for a solution demand an integrated approach to combating poverty, restoring dignity to the excluded, and at the same time protecting nature”. (139). Everything is interconnected.
Already in the announcement of the Synod in October 2017, Pope Francis indicated fundamental points of this Synod, that is, in Amazonia, “identify new paths for the evangelization of this segment of the People of God, especially the indigenous peoples, often forgotten and without the prospect of a peaceful future, also due to the crisis of the Amazon rainforest, the lungs of paramount importance for our planet”. Therefore, great themes: new paths, evangelization, indigenous people and the forest. All this is summarized in the current theme of the Synod: “Amazonia: new paths for the Church and for integral ecology".
It deals with the mission of the Church in Amazonia: to evangelize, that is, to proclaim Jesus Christ and His Kingdom and consequently to care for the “common home”. Basically, it is a matter of caring for and defending life, both for all human beings, especially the indigenous people who live there, and for biodiversity. Jesus said: “I came that they may have life and have it abundantly” (Jn 10: 10).
In this context, what Pope Francis calls “integral ecology” is important, to say that everything is interconnected: human beings, community and social life, and nature. What is done to the earth as evil ends up doing harm to human beings and vice versa. There is a need for an ecological conversion, inspired by Saint Francis of Assisi. As the Pope says in Laudato si',
“a healthy relationship with creation is one dimension of overall personal conversion” (218). “First, it entails gratitude and gratuitousness, a recognition that the world is God’s loving gift. ... It also entails a loving awareness that we are not disconnected from the rest of creatures, but joined in a splendid universal communion” (220); it “[enriches] the meaning of this conversion… [including] the awareness that each creature reflects something of God and has a message to convey to us, and the security that Christ has taken unto Himself this material world and now, risen, is intimately present to each being, surrounding it with His affection and penetrating it with His light. Then too, there is the recognition that God created the world” (221).

Intervention by Bishop Fabio Fabene
The Apostolic Constitution Episcopalis communio provides for the preparatory phase as the first stage of the synodal journey. On the occasion of the presentation of the Instrumentum laboris, which concludes this phase, the initiatives that led to the drafting of the document were presented. This was followed by a period of in-depth study of the Instrumentum laboris through a series of activities carried out in various places, including through the competent episcopal bodies. I would like to remind you of some of them: the Pre-Synodal Assemblies on the Instrumentum laboris in the various Episcopal Conferences, the REPAM Theological Symposium, held in Rome at the end of June, the meeting of the itinerant teams in Manaus, Brazil, and numerous virtual seminars and local meetings. Particularly significant was the meeting on the Amazonian Synod that CELAM held in Colombia on 6 and 7 September last. Some of you may have participated in some of the visits to the Amazon territories organized for journalists.
The synodal journey was accompanied by the prayers of all those involved. In particular, the initiative “40 days across the river. Sailing together. The good news of God towards the Amazonian Synod”. A journey of listening to the Word of God and of prayer, spread also via social networks.
We are now on the eve of the beginning of the celebratory phase, which is the true and proper Synod. Bearing in mind that we are facing a Special Assembly, the work will follow a methodology that, compared to the previous Synods, has been partially renewed in order to deal more systematically with the specific nature of the topics to be dealt with. The work will be introduced by a report by the General Secretary, to illustrate the synodal path. This will be followed by the report by the General Rapporteur, who will present the contents that emerged during the preparatory phase and outline the main topics for discussion in the Hall and in the Circoli minori. The triple division of the parts in see-judge-act will not be followed, but this method will be found in the various themes under discussion. The speeches in the Hall of the Synod Fathers, of the Auditors, of the Fraternal Delegates and of the Special Guests will last four minutes. At the end of the days on which the General Congregations are held there will be time for the free interventions by the Synod Fathers.
The Circoli minori will present their contributions which, together with the interventions in the Hall, will allow the General Rapporteur, assisted by the Special Secretaries, to prepare the first plan for the Final Document of the Synod. After this has been submitted to the Hall, they will propose amendments for the final draft, which will be voted on by the Assembly.
Communication during the Synod is entrusted to the Dicastery of Communication. Every day there will be briefings coordinated by the Prefect of the Dicastery for Communication and the Director of the Holy See Press Office. As in the past, some of the Synod Fathers and other participants in the Special Assembly will intervene daily. The social networks (Twitter, Facebook and Instagram) of Vatican News and the General Secretariat of the Synod of Bishops will contribute to the dissemination of news on the synodal work. The hashtag #SinodoAmazonico will also be active in several languages in order to provide adequate information on the Synod.
The Synod Fathers will be able to give personal interviews outside the Synod Hall.
As in the last Synods, the interventions in the Hall will not be officially published in the Holy See Press Office Bulletin. Instead, the reports of the Circoli will be made public via the Holy See Press Office.