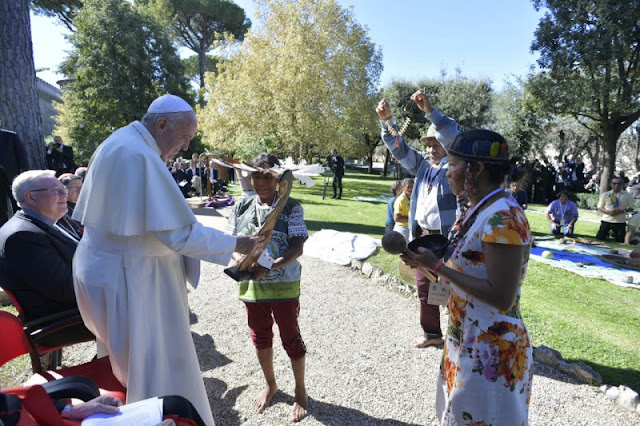 The phrase “Everything is connected” recurs often in Pope Francis’ Encyclical, Laudato Sì.

During a unique ceremony in the Vatican Gardens on Friday, signs, symbols and songs, ensured that everything really was “connected”.

Saint Francis and ecology
Starting with the timing: 4 October is the Feast of Saint Francis of Assisi, which closes the “Season of Creation” that began on 1 September. This year also marks 40 years since Pope Saint John Paul II proclaimed St Francis Patron Saint “of those who promote ecology”. And, in just two days, the Synod for the Amazon will open, the first Synod ever to address the issue of integral ecology.

Organizers and participants
Then there were the participants: the Pan-Amazonian Ecclesial Network, the Order of Franciscan Friars Minor, and the Global Catholic Climate Movement organized the event, while various religious congregations and representatives of the indigenous people of the Amazon Region played important roles in providing colour and creativity.

Signs and symbols
The ceremony culminated with the planting of a holm oak from Assisi. The name of the tree is believed to come from the old Anglo-Saxon word for “holly” – “holy”.

Even the soil in which the tree was planted came steeped in significance. There was soil from the Amazon, celebrating the wealth of the bioregion’s cultures and traditions; earth from India, representing countries most vulnerable to the climate crisis, where droughts and floods leave millions devastated; soil representing refugees and migrants, forced to leave their homes because of war, poverty, and ecological devastation. There was earth from places of human trafficking, and from sustainable development projects around the world. And there was more soil from the Amazon, earth bathed in the blood of those who have died fighting against its destruction.

The Canticle of the Creatures
But the tree also stands in soil coming from the places where Saint Francis walked, in and around Assisi: a place of encounter with the Creator, where the Saint composed the first part of his “Canticle of the Creatures”. Written in the 13th Century, it is believed to be one of the first works of literature in the Italian language.  A musical version of this prayer-poem accompanied the tree planting ceremony in the Vatican Gardens.

Celebrating the Season of Creation
The Prefect of the Vatican Dicastery for Promoting Integral Human Development is Cardinal Peter Turkson. He too was present at the ceremony, and described how the “Season of Creation” is “not only a time for prophetic gestures…but a time for wisdom”, a season to respond to the ecological crisis”. Pope Francis’ Message for the World Day of Prayer for Creation, said the Cardinal, suggests “a time of change: humanity’s turning a new leaf to save the planet”.
Full Text by Vatican News.va + Image Share from Vatican.va
Posted by Jesus Caritas Est at 6:01 PM